April 28, 2020
Back when this pandemic first began I reached out to The Top Secret Writer and asked him what he thought about us doing some articles in the magazine on pandemics and plagues in the Old West. He replied immediately:

"Just what I want to read! Disease stories in True West. How uplifting. NO!!"
—Paul Andrew Hutton

So, without further ado, here are some "disease stories" we will not be running in the magazine.


One Man Saw It Coming And Nobody Believed Him 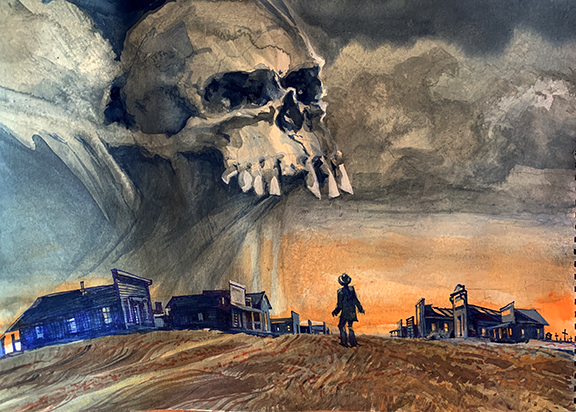 Daily Whip Out: "One Man Knew"

According to an excellent book I'm reading, "The Great Influenza" by John M. Barry, the deadliest plague in history—1918-1919—started in Haskell County, Kansas and one man, Dr. Loring Miner, knew first hand about it, because many of his patients were dying, but no one would listen. Now, according to Barry, Haskell is about 50 miles west of Dodge City and you'd think that might be interesting to the readers of True West, but no, we will listen to the Top Secret Writer and not run this.

A graduate of Ohio University in Athens, Ohio, Dr. Miner went back home to Kansas and spent 30 years on the prairie. He was a progressive thinker and when the germ theory of disease was first advanced he built a laboratory in his office, and learned how to administer the antitoxins for dipththeria and tetanus. He was the classic frontier doctor and his practice ranged over hundreds of miles treating townspeople and farmers alike.

In late January of 1918, Dr. Miner came across several patients, on his rounds, with the same symptoms—violent headaches, body aches, high fever and a persistent cough. And then more and more came down with the same symptoms. He diagnosed all of them as influenza, but he had never encountered a wave of flu this strong and wide. By February, he was struck with how violent and rapid the sickness spread. And then they started dying, the strongest, the healthiest and even the most robust were struck down, as Barry puts it, "as if they had been shot."

Miner turned all of his efforts to finding the source of this disease. He looked through all his medical journals and he called other doctors throughout the region and he even contacted the U.S. Public Health Service, but he got no help.

He issued a warning, published in Public Health Reports to alert health officials to this new outbreak and it is the first reference to the outbreak on public record.

And then, in March, the disease disappeared. The schools reopened and the locals went back to work. And everyone turned their attention to the war in Europe.

A young soldier named Dean Nilson came home to Jean, Kansas on leave from Camp Funston, which is in the Fort Riley, Kansas military reservation. The fort held, on average, 56,000 troops. After his leave, Nilson returned to Camp Funston, and within a short time 1,100 men were sick and admitted to the post hospital.


Many others didn't show symptoms and were shipped overseas and that's when the numbers go off the charts, with the lowest estimate of the pandemic's worldwide death toll being at 21 million and some now estimate the number is at least 50 to 100 million deaths.

One Kansas frontier doctor tried to warn everyone, but they weren't listening.

"There is a fine line between telling the truth and being a pendejo."
—Old Vaquero Saying