Billy the Kid In The Land of Disenchantment

Remember the guy from Tinnie, New Mexico who wrote me the long diatribe—A Tinnie Tantrum—and said he feels sorry for me because my "job" is to glorify criminals and "cop killers"? Well, just for the record, he is not alone in New Mexico.

The Land of Disenchantment

There is definitely an anti-Kid sentiment in Santa Fe, where several high up government administrators have literally rolled their eyes when I asked them why there isn't any Fort Sumner historical displays on Billy the Kid at the state park there. To them, the Navajos are the worthy subject matter and the Kid is unworthy of historic legitimacy.

On my first research trip to New Mexico, in 1990, I stopped at the Silver City Museum and when I walked in the front door an elderly woman (younger than I am now) in a period dress asked me if she could help me and I said, "Yes, thank you, I'm here to do research on the boyhood home of Billy the Kid," and this very sweet, volunteer docent said, "There are many historical characters from this area who are more interesting than that petty criminal." Okay, I said, somewhat taken back, then tell me who they are. And, of course, the first name out of her mouth, was her grandfather.

Sweet, but kind of moronic and pathentic, if you ask me.

Or, since we're in the name-calling game, maybe I am the pathetic moron. 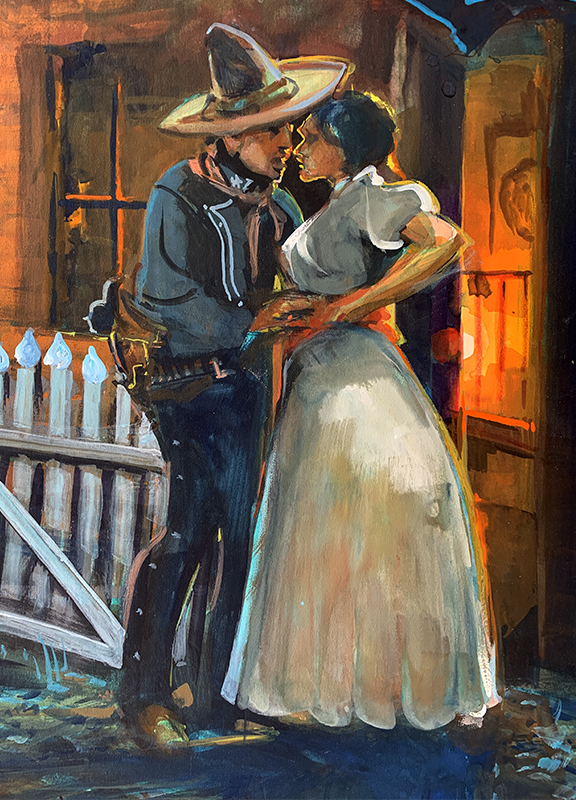 I want to expand on an idea I had in the first Billy book. Would we remember the Kid if he had received his pardon? 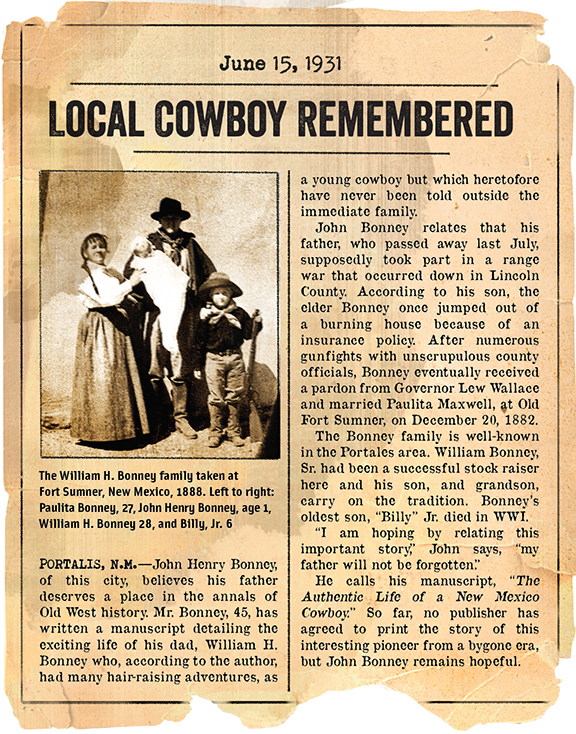 This painfully accurate clipping, was created out of whole cloth by myself with graphic help from the very talented Rebecca Edwards. I am emulating literally hundreds of articles I have seen and read in small town newspapers all over the West. Like the pretty docent in Silver City, certainly her grandfather is more worthy of being remembered than some cop-killing cretin with buck teeth.

Oh, and the Kid's second son, in the faux article above, is named for the Englishman, John Henry Tunstall, the only dude in Lincoln County who showed the Bonney boy any kindness.

A memory is like a shadow passing across the moon. . . 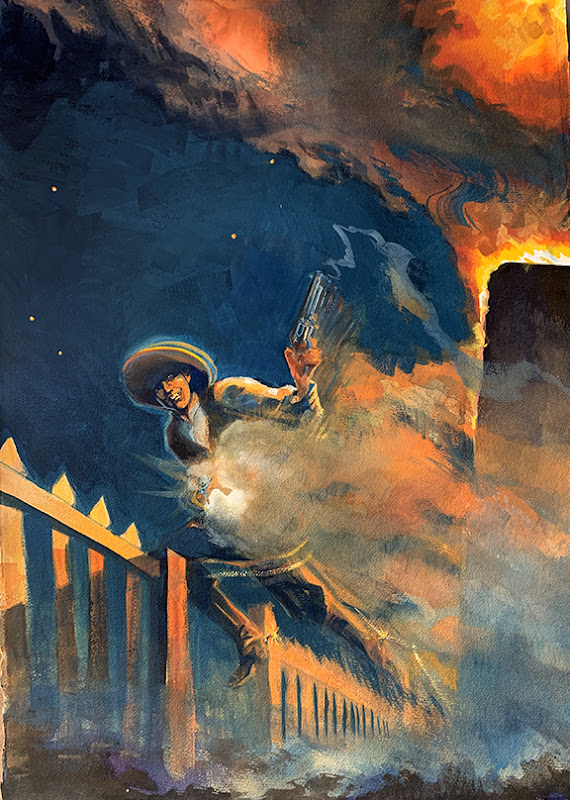 Daily Whip Out: "The Gate Crasher"

Shortly after we took over the running of True West magazine, we planned a cover story on the Kid's Kids. Fred Nolan wrote us up a tremendous piece on the main suspects who might have fathered children with the notorious outlaw.

How would we illustrate that on the cover? I remembered an old True West cover from the fifties: "Is This The Funeral of Billy the Kid?" What if we ran a photo of the Kid and Paulita and their kids at Old Fort Sumner? Jenny Smith told me about her friend, Mary Hartless, who recently had bought an oldtime camera that made actual tintypes. Turned out Jenny and Mary were attending a history encampment at Tubac, that very weekend. So I left the house at four a.m. and drove the 187 miles down to Tubac, south of Tucson, in three hours. Got there, found Jenny Smith who introduced me to Mary Hartless, and, grabbing potential models and literally kids at random from the campers, we set up against a 100-year-old adobe wall and shot this. 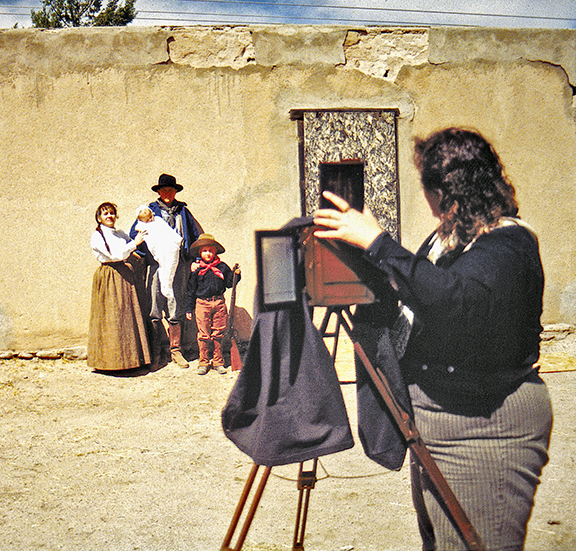 Mary developed the photos and Dan The Man Harshberger whipped out a cover and we showed it to the statff and our friends and they all had the same reaction: "Why would True West magazine run a fake photo on the cover?"

Like I said, maybe I am the pathetic moron.

"What people choose to believe is a fact in itself."