The Kid In The Red Shirt On The Santa Fe Trail

The young McCarty brothers and their sick mother endured a long and circuitous 2,500 mile journey from New York to New Mexico, probably all by wagon. They joined thousands of migrants moving along westward trails, in the late 1860s, trying to find a better life. The wagons creaked and bumped along the rough, uneven roads and once they crossed the Mississippi, they encountered seemingly endless expanses of short and tall prairie grass. One traveler on the Santa Fe trail marveled, "In spring, the vast plain heaves and rolls around like a green ocean." Others spoke of the "purity of the plains" and how it seemed to cure sickness. This was surely the silent wish of the McCarty kids whose mother was sick with tuberculosis. 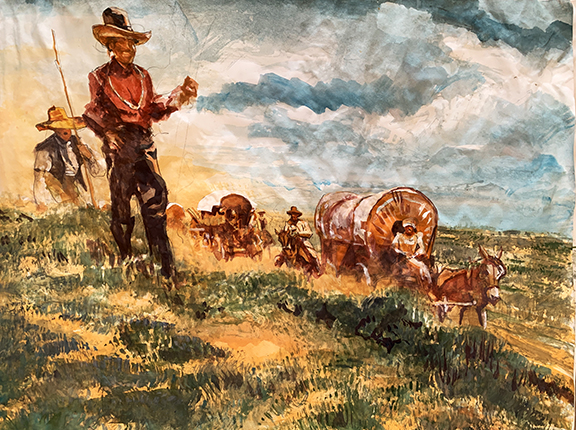 Daily Whip Out:
"The Kid In The Red Shirt
On The Santa Fe Trail"
Josie (above, left) and his brother Henry (in the red fireman shirt) often scampered along the trails and explored the byways, which must have prompted this line, more than once.

"You boys get down from there. You'll hurt yourself."

—Every mother who ever lived

The Daily Routine On The Trail

At dawn, they heard the cries of the trail hands, rounding up stock, sorting and hitching up the teams. The women and children packing up and moving out, the air ringing with whoops and cries of "Stretch out!" And "Catch up! Catch Up!" Someone was always lagging behind. On good days, there was usually a stop at mid-morning and the crews unhitched and grazed the teams. They hauled water, gathered wood and buffalo chips for fires. They cooked and ate the day's main meal, usually coffee, beans, dried apples and wild game when it was available. After dinner (the main meal at noon) men repaired the wagons, yokes and harnesses, greased the wagon wheels and doctored animals. Soon enough they were back out on the trail, pushing across and past running streams and dry washes. They often timed their crossings to make it across before dark because storms could turn into raging torrents and more than one wagon train was swept away after lounging too long on the banks of a placid stream. On a good day, wagon trains could make about fifteen to twenty miles, before finding a high, safe spot, and bedding down for the night. This routine was continued for eight weeks on a straight run, but the McCartys stopped often and even tried to put down routes at various locations (see map), but they didn't take and by the March of 1873, they found themselves in Santa Fe, New Mexico.

Inspired by the greatest paragraph in the history of New Mexico, which says in part: "Shrewd as the coyote. Free as the hawk. The outlaw of our dreams—forever free, forever young, forever riding." 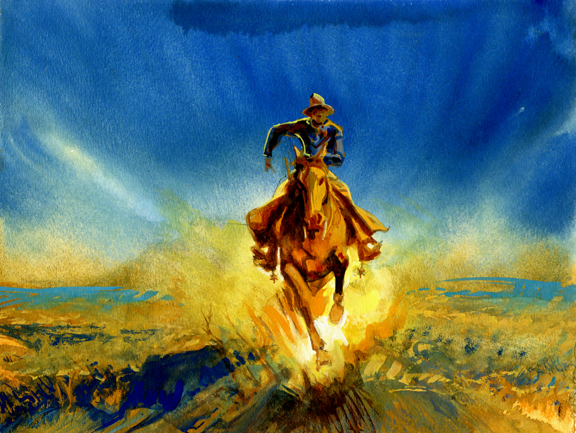 Daily Whip Out:
"Forever Young, Forever Riding"
final
Thanks Top Secret Writer for the timless quote.
"When I was researching my dual biography of William H. Bonney and Pat Garrett, Bob Boze Bell’s The Illustrated Life and Times of Billy the Kid proved to be an important and delightful reference.  With its invaluable timeline for the Kid, numerous historic photographs, and, of course, Bell’s arresting artwork, I was immersed in the color, mayhem, and tragedy of the Kid’s world.  There wasn’t a Billy book I enjoyed more, and this welcome new edition is even better."

—Mark Lee Gardner, author of To Hell on a Fast Horse: The Untold Story of Billy the Kid and Pat Garrett