The other day Bob Reece asked me how I met Billy Gibbons and here is the true story.

Back in 1977 I was living in Tucson and doing a humor magazine with Dan The Man Harshberger, called the Razz Revue.

The Razz Fanned Out

I was always looking for ways to promote the magazine—I mean Magazomic! One day I came up with the bright idea of putting together a care package of back issues and T-shirt designs, like these: Yes that is Ed Mell, doing his best Doper Roper, second from left, and that is Dan The Man, far right. The female model was the girlfriend of a publisher friend and she was very pretty, but she thought giving a cross-eyed look would help "zane it up," and she might be correct, although I doubt her grandchildren would agree.

So, I put a handfull of back issues and an assortment of Razz T-shirts in a box and then I would drive downtown and drop it off at the box office, whenever big time rock groups came to town. The first box went to the Beach Boys. I went to the concert and nothing happened, no mention, no thank you, no contact from the band, not even the promoter had the courtesy to respond. Undeterred, I did Jethro Tull. Same result. Then came the Eagles, and I got real excited when a roadie came out on stage before the show and he was wearing a Razz shirt (the one, above that the cross-eyed looker is wearing). But then, nothing else. I was very discouraged, but I decided to do one more and that was a ZZ Top show at the Convention Center in Tucson. At the last minute, I had to go to Phoenix on Razz business and couldn't attend the show. When I got back to Tucson, I dropped in to see these guys. 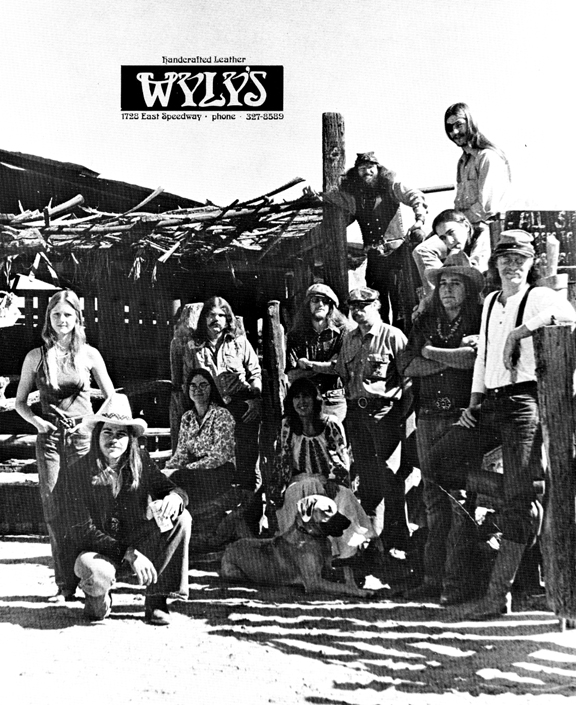 "Hey, Boze," said Johnny Weinkauf (kneeling at left, with the Coors can), "you must have been thrilled when Billy Gibbons gave you a shout out at the show last night?"

Johnny laughed: "You weren't there?"

"Well the lights went down, the band came out and Billy came up to the microphone and said, 'Anybody here tonight from the Razz Revue?' And someone yelled, and I thought it was you, and Billy said, 'This one's for you,' and they went into La Grange."

A few days later, I got a funky, low rider postcard from Billy, who was still on the road. The greeting said "Hay Mane," which was just the coolest. In fact, it inspired me to do all of my own postcards, I mean Bozecards. From there, he ordered subscriptions for all of his friends and we were off to the races. Everything I hoped the care packages would bring, had come true. I just had to get the right band and the right guy. And, I'm here to tell you, Billy Gibbons is the right Guy.

We had breakfast at the Nogales Cafe in 1982. He sent me a ZZ Top ball cap. For many years I got Christmas cards from the band and then last year we did this. 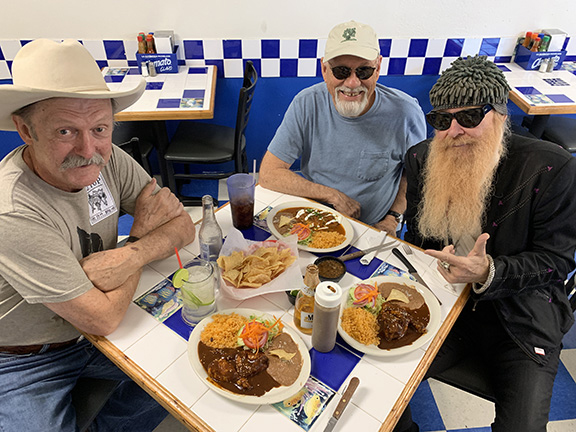 Yes, that's Ed Mell, center, once again. Turns out Billy is writing a Billy the Kid song and he asked me if I wanted co-writing credit. Ha. I'll believe it when I see it, but still, Hey Mane! Can't complain.

And now, you know the true story of my ZZ Top connection.