As I head for the last roundup of all things Billy the Kid I am struck by the circuitous nature of tall tales vs. hard history. While seeking the latter, it's damn hard to avoid stepping in the former.

Eventually, it's all "he said-she said" memory and this is undercut by the cold fact that everytime an oldtimer retells a "true" story he gets closer to the center of the stage. 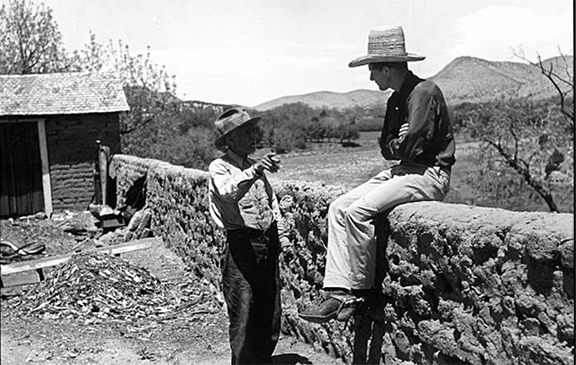 An oldtimer regales the artist Peter Hurd
about the exciting days of Billy the Kid.
After the blockbuster success of Walter Noble Burns' book, "The Saga of Billy the Kid," in 1924, many Lincoln County stalwarts got book deals, including George Coe who rode with the Kid and lost his trigger finger at the Gunfight at Blazer's Mill. 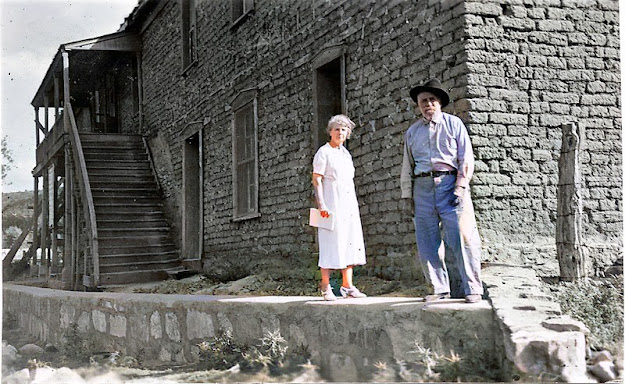 A photograph of the WPA writer Edith L. Crawford and George Coe standing in front of the Lincoln County Courthouse, shortly before Coe's death in 1941
"Chisum gave us [The Regulators] a right to kill his cattle whenever we wanted to as he knew we would do it anyhow. He said: 'Boys, always kill a heifer as I can sell the steers.' Whether we did that depended on how we felt and how far it was to a steer."
—George Coe, "Frontier Fighter" 1927
Posted by Bob Boze Bell at 6:06 PM