Local Girl Flips Out Over Conga Version of "Stairway to Heaven" 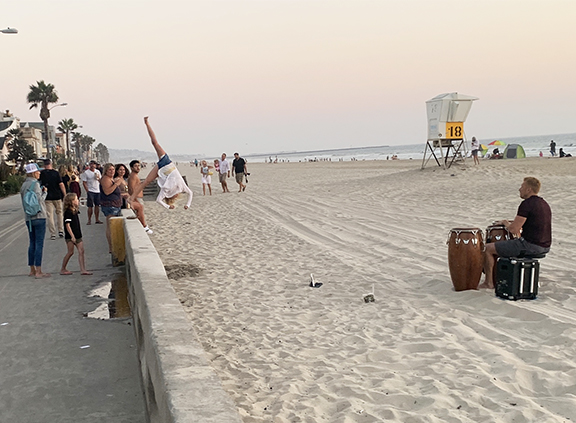 Local Girl Flips Out Over Conga Version
of "Stairway to Heaven"

I sent this photo to my kids, and my son, Thomas Charles, replied with this response:

"That's ridiculous! Also, how do you play 'Stairway to Heaven' on the congas?"

Good question. Kathy and I were walking on the beach and I heard congas. "Where is that coming from?" I asked. The Goose said, "Up there by the sea wall. See him?" I looked up and spied him, then said, "Let's go up there and see what's going on," and your mother said, "No." And I said, "Why?" And she said, "Because it'll just be a bunch of drunks talking to a drummer." Ha. Like she would know anything about THAT!

So, I dragged her up there and lo and behold this guy has a full set of congas set up with a speaker behind him (you can see it in the photo) and out of the speaker is coming a kind of Jack Johnson style version of "Stairway to Heaven." Very mello and slow, if you can believe that. Anyway, these three blond kids, two boys and a girl, started doing back flips off the sea wall. And I caught the girl going off.
And your mother was right. It was just a bunch of drunks talking to a drummer. I did put $5 in his tip box, though. So I've got THAT going for me.
"There's a sign on the wall, but she wants to be sure
'cause you know sometimes words have two meanings."
—Led Zeppelin
Posted by Bob Boze Bell at 7:27 AM