Up to my eyebrows in dueling projects. This is my view of the battlefield this morning. 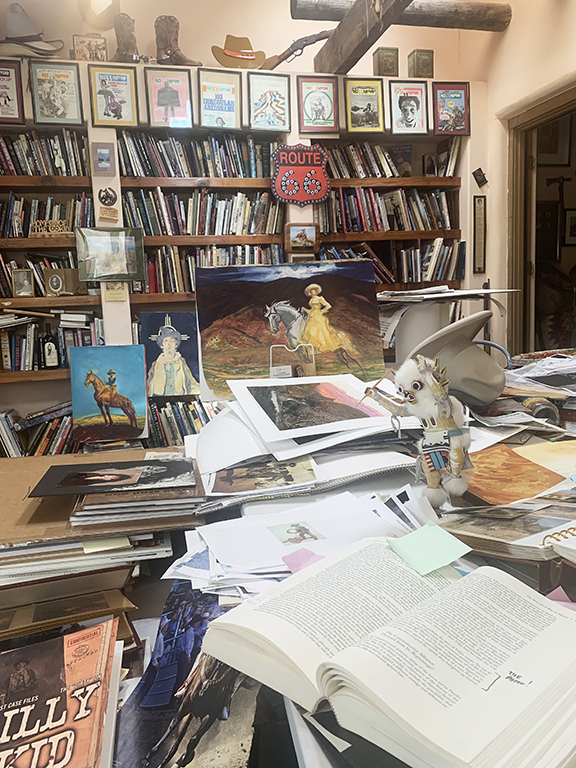 My biggest problem is trying to understand Pulse call technology in order to attack the Billy book and it's just kicking my old, sagging patootie.

Meanwhile, we have an issue going out the door on Thursday and I need to finish this "Brown Water" project as well.

"Agua Prieta is going to be mine. I am through with them, and all and forever. Do you understand?" 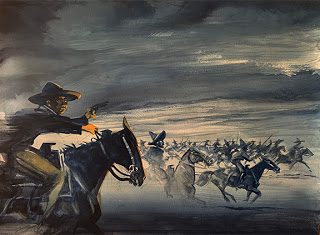 Daily Whip Out:
"Midnight Charge of The Villistas"

The End of the Cavalry Charge

Pancho Villa was known for his furious, full strength cavalry charges, usually unleashed at around midnight for full suprise effect. After the almost complete destruction of his forces at the Battle of Celaya the previous April, by General Alvara Obregon, Villa hedged his charges at Agua Prieta. Still, 200 Villista horses were killed and left on the battlefield, so some habits died hard.

Moving into position two miles east of Agua Prieta, Pancho Villa and a force of 8,000 soldiers spread out along a low ridge, shielding them from the fire of the bordertown defenders. At 1:37 p.m. a vigorous artillery shelling begins with Villa's big guns unleashing round after round on their objective. Several small buildings and a flour mill are hit and set afire. Under cover of the artillery barrage, Villa's infantry advance forward, which draws the fire of the Calles defenders, including their own heavy artillery.

Incredibly, as the Villista infantry troops advance towards a slaughter house they then veer off to the border fence and beg a line of American specators for water! Ironically, Agua Prieta is Spanish for "brown water."

By 3:15 p.m. Villa's second wave of attackers advance a quarter mile and they also went to the fence and begged for water. The main attack comes at 2 a.m. but even the darkness did not protect them as the Carranza defenders utilize search lights to light up and mow down the invaders. By dawn, no attackers have breached the mine strewn battlefield, or the town itself.

Another attack is attempted on the west side of Agua Prieta on the morning of the second, but it too is repulsed. Villa and his troops stumble on to Naco to reassemble, but some 1,400 of his troops desert him. The battle is over and so is the cavalry charge.

News Dispatches On The Fighting

"Reinforcements for Calles have begun to arrive through the United States. . .the first of nine trains bearing Carranza troops, and equipment from Laredo [Texas] arrived late today for Agua Prieta.

". . .the Carranza garrison was sweeping from all sides of the town with rifles and machine gun volleys guilded by searchlights. Although it is believed the volleys went over the heads of the Villa forces, cheers rang out in the Carranza trenches as every volley was fired."

"The general opinion among American army officers is that Villa has fooled the Crranza forces; that he merely 'nibbled' at Agua Prieta, and finding it much tougher than he expected, will now ignore it with its much coveted supplies or provisions and ammunition, and after his army is thoroughly rested and provisioned, will strike down through Hermosilla and Magdalena to the west coast for a campaign of much greater importance."

"Further information, concerning Villa forces, was given by Juan Mendoza aged sixteen, who was wounded in the leg during a skirmish at Gallardo yesterday and brought to the Carranza hospital at Agua Prieta.

"We have had no beans or flour sine we left Casas Grandes," the boy declared. "Our food has been just. plain vaca—cow." Mendoza declared the Villa men were tired and hungry."

DOUGLAS, Nov. 1 (11 p.m.)—Corporal M. Jones, Company G. Seventh Infantry, stationed with his company near the United States customs house, was shot through both legs in a sharp firing between 9 and 10 o'clock tonight. The soldier was taken to the Y.M.C.A. building. His wound is not considered dangerous.

DOUGLAS, Nov. 2 (2 a.m.)—The fighting has commenced at 1 o'clock and has grown apace and the bullets from the Mexican rifles are flying over the southern part of Douglas. The artillery bombardment is terrific.

H.K. Jones, a letter carrier was shot during the firing and was hurried to the Calumet hospital. [apparently, these are two different Jones, this Jones was standing in his front yard when he was hit]

DOUGLAS, Nov. 2 (3:15 a.m.)—Though the firing has abated somewhat there is every indication the fighting will continue all morning. Villa's big guns seem to have stopped and Calles' artillery appears to be, alone, active in this division."

"It was apparent at sundown that Villa had extended his lines to the south and west in an enveloping movement, striving to get to the west of Agua Prieta whence a dash could be made should opportunity afford."

"At no time during the day did other than random bullets fall across the international boundary line. Some of these fell on the roof of the Douglas Y.M.C.A. but their force was spent and no one was injurted."

"[General] Calles reported his losses today as eight killed and 24 wounded. He claimed the dash of the Villa troops to the Agua Prieta barbed wire entanglements had been repulsed with a loss of at least 200 to the Villa troops."

One of the Villa attackers, Captain Estrella has been wounded. He crawled over the boundary "west of the slaughter house where he was found by Sheriff Harry Wheeler and taken to the Twenty-Second infantry camp hospital."