Confessions of A Honkytonk Drummer: Nympho Rodeos and Barroom Brawls

It was a tough time and I was going through a divorce and I found myself in a rough place.

Confessions of A Honkytonk Drummer

Playing in honkytonks was theraputic to me and gave me a new lease on life. Some have accused me of slumming, but I have never seen it that way. In fact, when it came time to do my stories of the experiences I had there, I tried to disguise most of the characters I met and the places I worked at to protect their privacy. I created a fictitious bar, featured in this version of a thinly veiled character I knew growing up in Kingman. 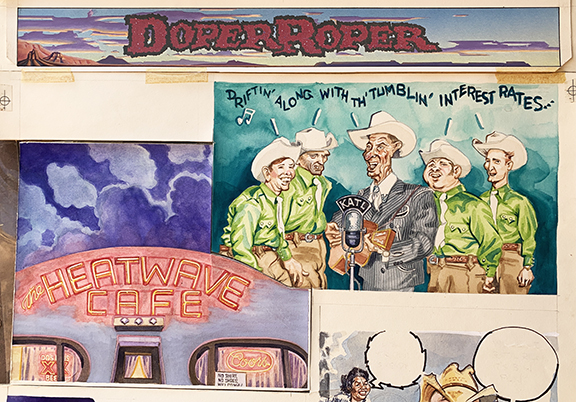 Hayloft Whip Out:
"The Sons of The Anglo Pioneers
at the Heatwave Cafe"

The Sons of The Anglo Pioneers did a live, weekly radio show on KATL (Moo!) Radio, which was in a fictional town called, of course, Cattletrack. This was before I knew there was a real Cattletrack Art Compound in Scottsdale, and it's entirely why I have held several art shows there. To me, the name Cattletrack perfectly captures my imaginary world and is still one of the coolest names in all of the Southwest region.

The barroom brawl is a cliche and I've seen a couple, but from my experience it's mostly one punch and done. Case in point: at The Longhorn, another classic, extinct Tucson watering hole, I witnessed a crazy guy come in the front door, obviously high on something, and he was super giddy as he lunged at the first person at the bar and bear hugged her, and kissed her on the cheek; then he quickly went to the second person, who passively allowed his creepy fawning and so did the third person. But the fourth person at the bar was an old cowboy looking straight ahead at his beer, and when Mister Giddy came to him and attempted to hug him, the old cowboy turned on his barstool and punched him right in the face. Mister Giddy was horrified and holding his bloody nose, he staggered to the front door and disappeared into the night. One punch. Done. 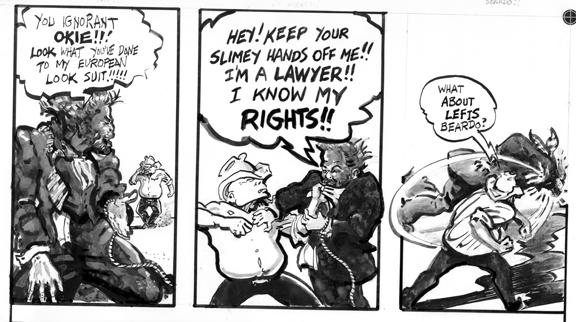 Hayloft Whip Out: "One Punch. Done"

Oh, and the thinly veiled character, above, who I called Granthum P. Hooker (The Doper Roper) was actually based on a feisty Kingman cowboy who was a big fan of my grandfather, and his name was Buzzy Blair. I know, I know, it's such a great name but I couldn't use it because I knew my grandfather would kick my ass. And he still might!