My time spent playing drums for a Country Western band in the Hayloft Bar on Ruthrauff Road in Tucson paid off nicely, because I channeled all those crazy experiences and all those sketches (see below and in yesterday's post) into the launch of a certain, young woman. 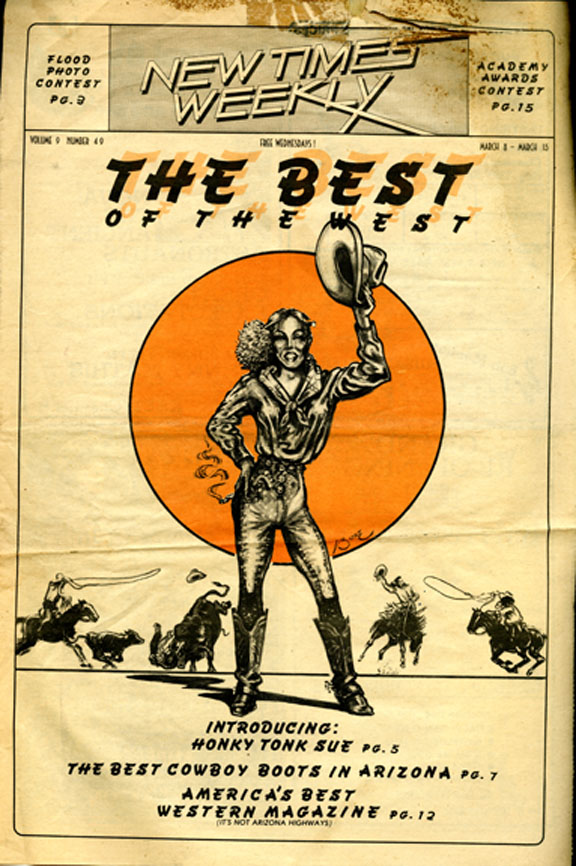 And speaking of New Times, a friend of mine who writes under the nom de plume—The Arizona Dude—sent me an article he did on The Hackberry Hippie Bob Waldmire and he asked me what I thought of it. Here's my reply:

"I appreciated your Bob Waldmire article and thought you did a good job, but I am not a fan of his nor was he of me. It started when I did a parody of vegetarians in New Times Weekly and I got a nasty letter from him and from there it went straight downhill." 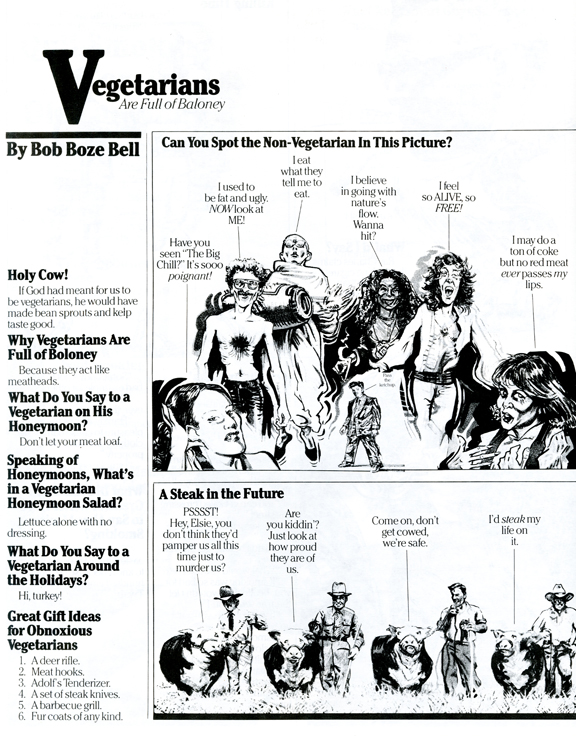 Part of the BBB Vegetarian Parody
That Ticked Off Bob Waldmire

"Two cartoonists with huge egos. What could possibly go wrong?"

Meanwhile, back to the Hayloft and the sketches that launched the cartoon character that led me all the way to Larry McMurtry's typewriter. 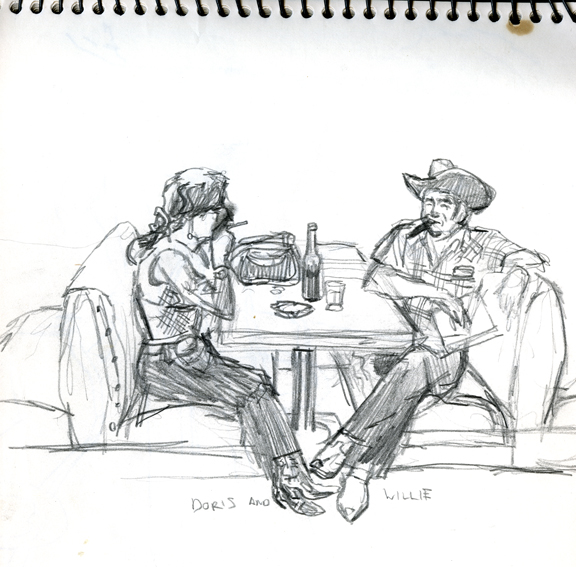 Hayloft Whip Out: "Doris and Willie."

I met some really interesting people at the Hayloft, in fact almost all of them were wonderful people, but danged if they didn't smoke like chimneys. 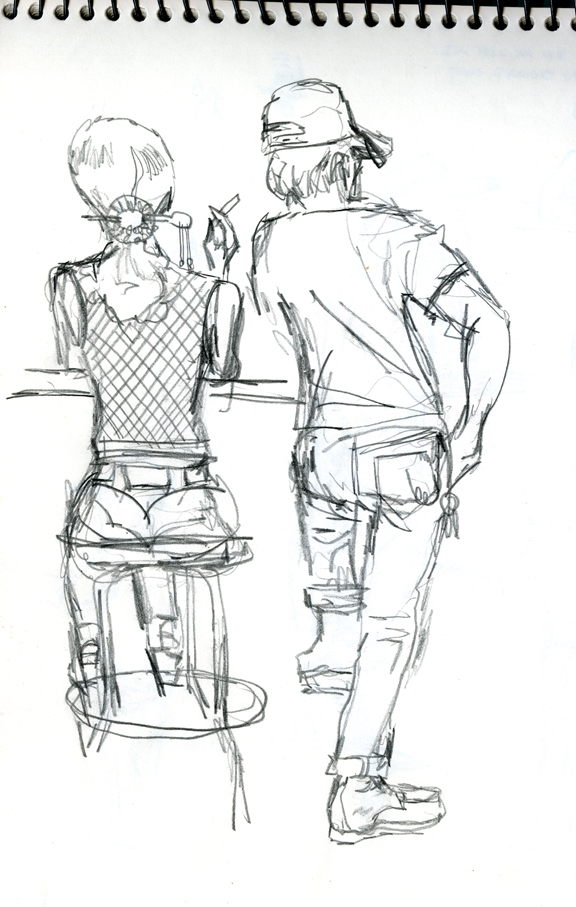 This next page of sketches shows part of the stage and The Southern Tornado's piano and mic stand. 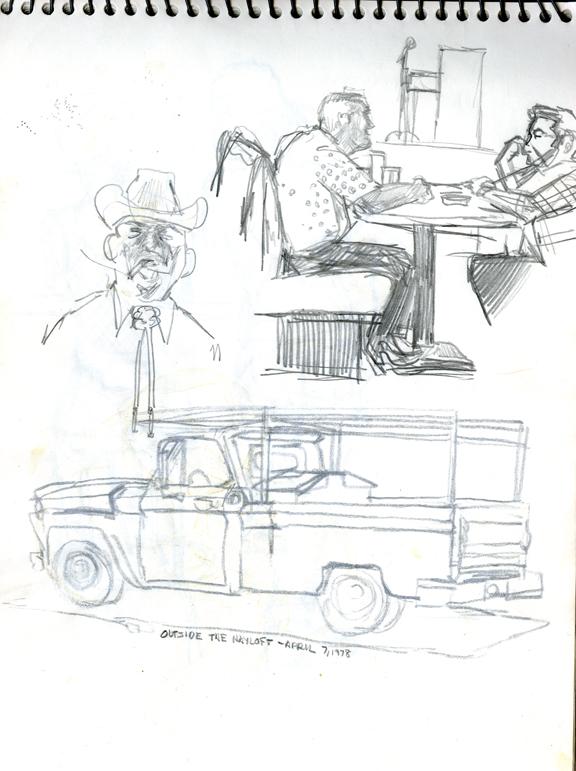 Hayloft Whip Out: "Inside And Outside"

After a long stint as the house drummer in a revolving lineup of Country musicians at the Hayloft, the owner asked me if I had anybody in mind to replace the last leaving git picker. I told him I had been jamming with a wild-and-crazy piano player who we called The Southern Tornado and that I was part of a three-piece back-up band that featured Steve Denis on the stand-up-sit-down bass (he played a stand-up bass, but sat on it like a horse) and Jack Alves on lead guitar. The owner agreed to give us a try-out and we frankly blew the doors off that place, both figuratively and literally. After our set with the Southern Tornado (real name Kenny Brazell) which consisted of mostly Elvis and Jerry Lee Lewis covers, we did a Country set, but quickly ran out of material and decided to end the show with a Led Zeppelin tune called, "Whole Lottah Love."

Everyone watched this with a little horror, some wonderment and even amusement, and, in all fairness, it must be noted, nobody threw anything at us, or even got snotty, but very few applauded either. And, for some strange reason, that was my last gig at the Hayloft Bar on Ruthrauff Road in Tucson.

One Quick Note On The Challenges of Sketching In The Hayloft

People in a bar do not normally want their pictures taken or sketched, if you know what I mean. Several of my subjects, of course, caught me and demanded to see what I had drawn and usually they just laughed at how silly I had made them look, but nobody threatened to beat me up, which is kind of hard to believe, but it's true. Still, most of the time I tried to sneak glances, find the right angle and pretend to be doing something else. I also forced myself to go outside and see if I could document the rides, like the construction worker's iron hauling-rig on a Chevy truck (above). Was it for hauling steel, or rebar, or, what? I don't know but I drew it the way I seen it. 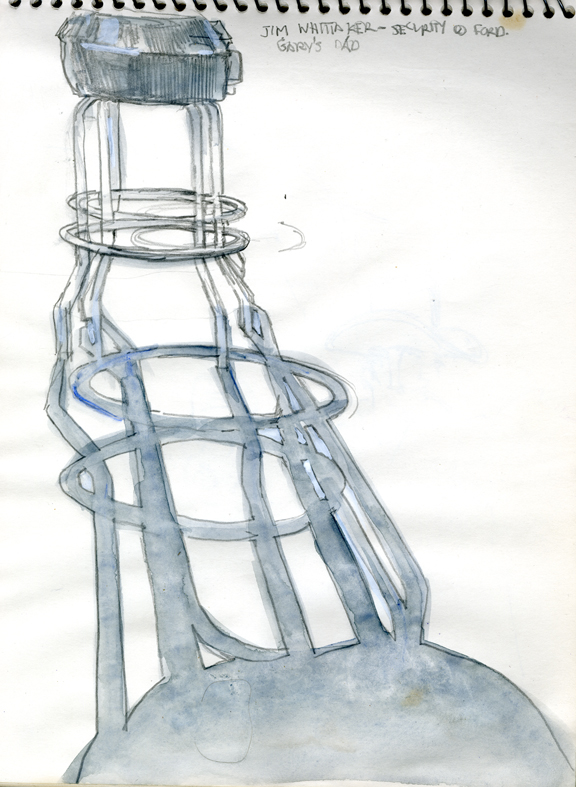 One Last Hayloft Whip Out: