It's been a long road to customer satisfaction on the Ghost Riders art print front. Here's the history:

May 29, 2015
Got up this morning and took a stab at the inspiration for a classic Western tune. As the story goes, a 9-year-old boy and an old cowpoke were oiling a windmill near Douglas, Arizona, when a big storm roared in and little Stan Jones was afraid. The cowpoke, Capp Watts, told the boy, "Don't be afraid, it's only the clouds stampeding and the ghost riders will get them rounded up. . ." 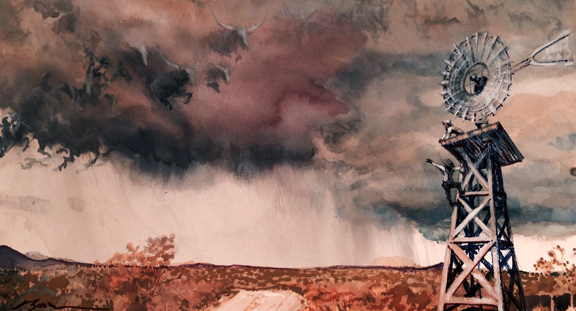 Daily Whip Out: "Ghost Riders In The Sky Inspiration (that I love)"
The problem is ol' Stan told a different story every time he was asked where the inspiration came from. This is from a new book on "The Life of Stan Jones: The Singing Ranger—Ghost Riders In The Sky" by Michael K. Ward. Interesting cat. I recommend the book, published by Rio Nuevo. Sometimes ol' Capp is on a ridge and Stan rides up to him, another time, well, here's a good example:
"Well, the idea for 'Riders in the Sky' came from an old Indian Legend which was first told to me when I was about, oh, twelve years old."
—Stan Jones on the radio being interviewed by Lloyd Perryman of the Sons of the Pioneers in 1950
The problem for me is, the art print I ordered did not match the above scan (for some reason the reds in the clouds dropped out) and I have a customer who gifted it at Christmas and I promised to get it fixed. The original painting is owned by my crazy friend and major BBB collector, Craig Schepp, but I didn't want him to have to take it out of the frame and deliver it to Cave Creek to rescan. A long drive and such a pain. That would be ridiculous. So, last week, I did something even more ridiculous and ordered five prints of the bad scan from JC Printing in Phoenix, on art stock paper, so it will take new layers of paint. The prints arrived via UPS yesterday. My biggest concern was the weak sky, so I immediately attacked three of them as strong as I dared. My MO is this: ruin four, save one. 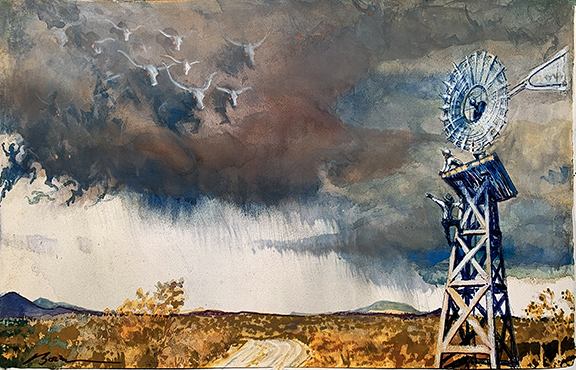 Perhaps the cattle are too enhanced and deliniated now? Was it more powerful to have them rather vague, like in the original? Certainly the landcape is better with the distant ridges defined and the vegetation enhanced to indicate a dry, parched land.

Which brings us to number four. 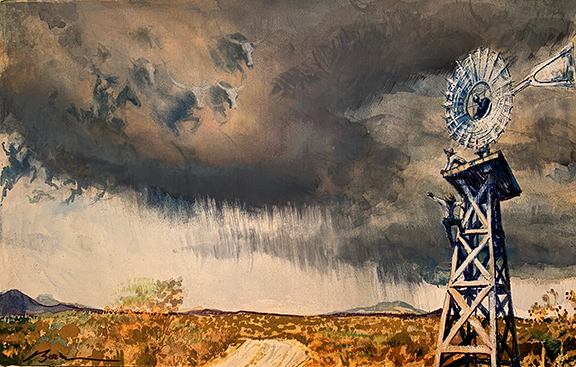 Much more subtle on the cattle in the sky and I also fixed a couple anatomical issues on the two guys on the windmill and the overall storm is more uniform in this one, which pops the windmill out a little better.
Tommorrow, I'll give you a taste of the two I ruined, just for grins.

"One of the definitions of insanity is doing the same thing over and over and expecting different results."