Calafia Is The Queen of California

Back to the Real Women of the Wild West. Or, at least back to a legendary woman who led to the real name of the golden state. "Calafia In The Mists of Baja"

On The Golden Shore)

Calafia was a character in "Las Sergas de Esplandián," an early 16th-century romantic adventure novel written by Spanish author Garci Rodríguez de Montalvo. In the book Calafia is described as a Black warrior queen who ruled a mythical island which was inhabited only by Black women who lived like amazon warriors. Calafia allegedly wore armor made of fish bones, used weapons made of gold. None other than Spanish explorer Hernán Cortés, a fan of romance novels, allegedly named the state of California for the Amazon queen.

Way back in 2019 when Kathy and I were in San Francisco, I took a special trip downtown to view an early portrayal of this legendary women created by one of my painting heroes. 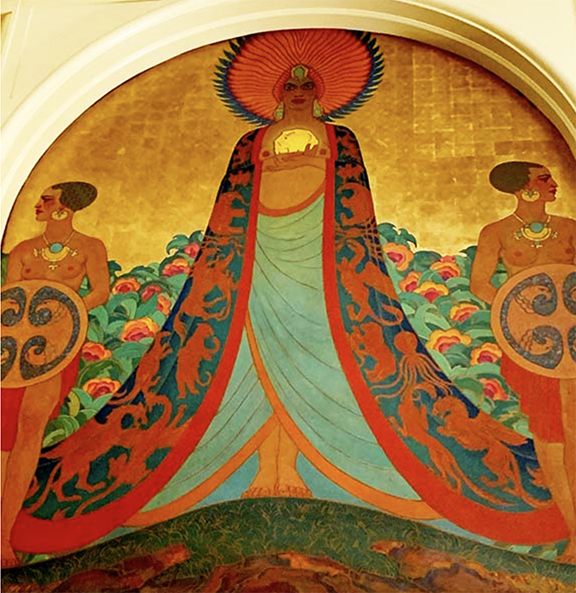 According to scholar Don Hagerty, this is Maynard Dixon's depiction of Queen Calafia, the mythical Amazon woman who the early Spanish explorers thought inhabited the Baja region with a group of women warriors. The Spanish, or more specifically Cortez, applied her mythical name to the new lands they just discovered, or, rather conquered, and that led to the name California. Maynard Dixon actually painted this and the other panels with the artist Frank Van Sloun  who also loved mythology and used it to great effect in this mural. If you are in the Bay Area I highly recommend you go see it. One caveat, you will need to make a reservation, it's not in the lobby but on the second floor and it can be seen by apointment only.

“I just found out her ghost left town, the Queen of California is stepping down."