August 10, 2010
Rock Holliday came in this morning to talk about teaming up with True West. He helped us at the Wickenburg Gold Rush Days Parade two years ago and has a good sense of promotion.

Yesterday, I finished a color version of the Clifffhanger sequence regarding How Mickey Got His mule On. After sliding off the trail, the pack mule flattened out and came to rest with his hind legs dangling off the precipice, then endured a rock slide: 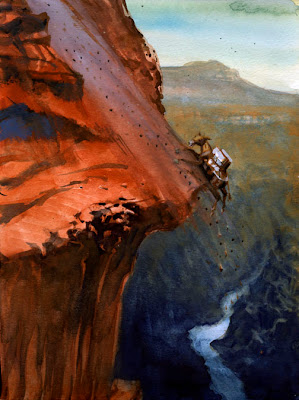 Also working on couple commissions. More on that later. Meanwhile, here's one of my heroes on what you and I should be doing in the near future:

"Twenty years from now you will be more disappointed by the things you didn't do than by the ones you did do. So throw off the bowlines, sail away from the safe harbor, and catch the trade winds in your sales. Explore. Dream. Discover."
—Mark Twain
Posted by Bob Boze Bell at 11:16 AM