August 18, 2010
Got some rain last night. Not much but it cooled things down this morning. Still supposed to get up to 107 today.

One guy who really messed things up in the Southwest was a West Point grad who thought he could show the Apaches a thing or two about toughness. His tactics were poor (he tried to arrest Cochise for the kidnapping of a child that ended up to be Mickey Free) and he compounded it by hanging several relatives of Cochise. Thousands died in the ensuing Apache Wars, including this soldier who is swearing at 2nd Lt. Bascom, the officer who botched it all: 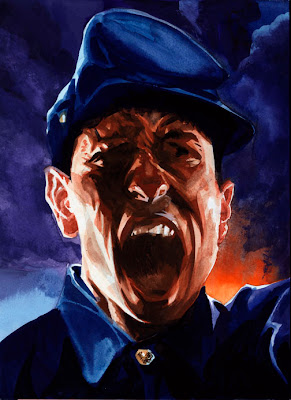 Working this into a sequence for our new feature Graphic Cinema.