August 14, 2010
Had dinner last night with a well-known Hollywood director, his son and the Top Secret Writer and his son. Went to El Encanto, and believe it or not, sat outside by the lagoon (good misters didn't hurt). The father-and-son quartet are on their way to Tombstone for a historical-bonding weekend and stopped in Cave Creek to see the True West World Headquarters. The Top Secret Writer paid.

Speaking of Paul Hutton, here is a photo of the two of us, when we met for the first time, in Santa Fe. I believe this is 1995, when, believe it or not, Ed Mell and his son Carson, joined me and my son Tomas, on a father-son trip to the Land of Enchantment: 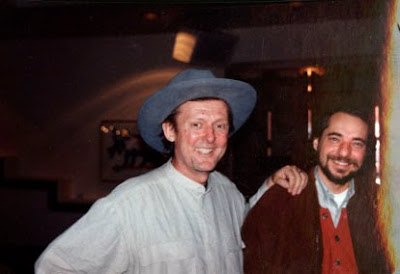 Five years later we came up with the idea of joining forces on a graphic novel. I have returned to a theme I worked on extensively over a year ago. With all of the angst over the Mexican border, I thought it was time to revisit a theme:

Mercy Me, Have Mercy On Mickey Free 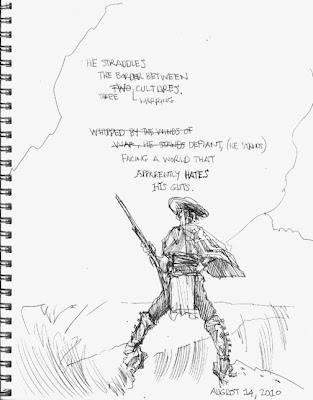 The movie style scene will depict the mongrel Mickey Free straddling a giant abyss with his Sharps rifle on his hip and staring out at us with a cocky, one-eyed stare.

"He straddles the border between three warring cultures. Defiant, he faces a world that apparently hates his guts."

That title (or, theme, actually) was inspired by the talk last night with the director who walked us through the character arc in a good story. The longtime Hollywood vet had little nice to say about our previous excerpt on Mickey Free in the magazine, bluntly calling it a mess. He wasn't rude, just very honest with us. His advice, or, challenge? What's going on in Mickey's head?

I woke up this morning and thought to myself, "Well, that would be 'no mercy.'" No one showed him any mercy and he has no intention of showing anyone else any.

Now, we're getting somewhere. I had to laugh. I realized it has taken me five years just to figure out who Mickey WASN'T. Ha.

"Most short stories are too long."
—Ray Bradbury
Posted by Bob Boze Bell at 1:20 PM