August 11, 2010
Went home for lunch and worked on a scratchboard of Mickey Free and his scars. This is based on an actual photo of Felix Telles Ward, the boy who started the Apache Wars and who actually chose to stay with the Apaches his entire life. 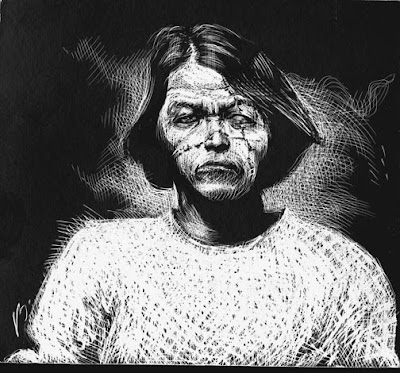 I read somewhere that a nefarious character in the Old West had "train track scars," and I loved that descriptive imagery, so I'm leaning a bit on the real Mick's visage, but there is no doubt that the boy was scarred, both inside his head and out.


It was the U.S. soldiers who nicknamed him Mickey Free. Yes, his left eye is blinded, in our version because of a scar inflicted by the one-eyed captivo who captured him. No, we're not making this up. Beto, was captured by the Apaches as a Mexican boy, grew up to be a mean s.o.b. and he led a band of renegades who captured Mickey near Patagonia, Arizona. Beto really abused the boy. Why? because as the Vaqueros are fond of saying:

"A convert to any cause is always overdone."
—Old Vaquero Saying

Or, if you want to end on a more positive note, as my mother was fond of saying,