August 16, 2010
It's been almost two years since we published our cover story on Mickey Free in a 20-page-excerpt. Although praised by more than a few of our readers, it was deemed "a mess" by the audience we especially wanted to score with (movie directors and studios).

Still believing we have a good story, The Top Secret Writer and I went back to the drawing board. Literally: 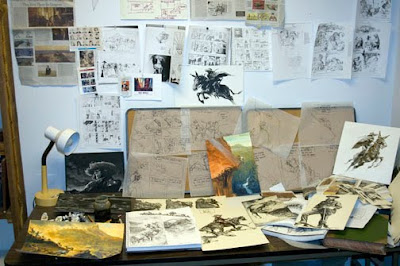 The first question we asked is: Why didn't it work? And: Why was it considered a "mess"?

I cleared out a room in my studio and set up a storyboard wall. Any kind of storyboard I see that catches my eye, goes up on the wall.

Every morning at seven I go out to the studio and sit here for 15 minutes (I learned this at the ADD seminar Kathy made me go to), and just soak it in. Why do I like the tracking narrative so much? Why does this one work so well? More importantly, what doesn't work?


The short answer: while not impossible, it's very tough to pull off multiple narrators in one story. David Mitchell does it well (Cloud Atlas) and Tarantino does it sometimes (Pulp Fiction) but, more often than not, it falls apart because it's confusing and tiring—two things a story teller doesn't want to hear, because the easiest thing for a reader to do is—stop reading.


And, as a visual guy first and foremost, I want the words to the story to be just the basics. So, that was the main thing I learned sitting in front of this wall.


Utilizing tracing paper, I chose one, small action sequence and began to sketch loosely and without hope, without despair. Within a couple days I had a sequence going and started to hone in the action. I have been posting most of the individuall scenes here for you to see for the past month, or two.


This morning I finished the last three scenes of the first sequence (hopefully, they'll go quicker as I move along). Here's one of them: 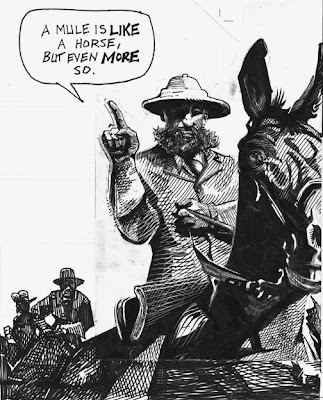 And here's the last two: 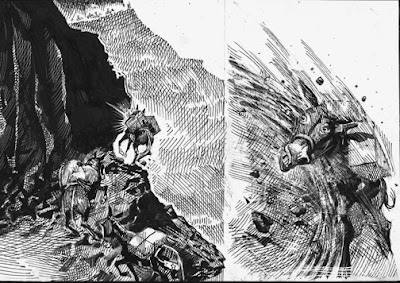 This morning, Robert Ray and I tweaked these last three panels into the layout and wrestled with the dilemma of how to do word balloons (I know, I know, it's been six years and we are still debating how to do them, either by my hand, or in Illustrator). We are having other design issues as well, so we called up our art director, Dan The Man Harshberger and he is taking a shot at streamlining the design and the process


All of this is in preparation for a two-page shot in the magazine, which will be leveraged into a three minute serial on cable TV.

I have three more sequences in the works and we're looking to run this mule one third, or even fourth in the sequence. I have tried to design them as stand alones.

So, there you have it: an update on a work in progress.

If you've read this blog for any length of time you know I am always looking for inspiration on how to tell a good story. Here's a good example: