August 5, 2010
In our ongoing efforts to get movies on paper into the magazine, we will be adding a new department in the next issue, to be called "Graphic Cinema." Our art director Dan The Man Harshberger came up with that title. First up will be our old stand by, Mickey Free, in a two-page episode I am calling "How Mickey Got His Mule On": 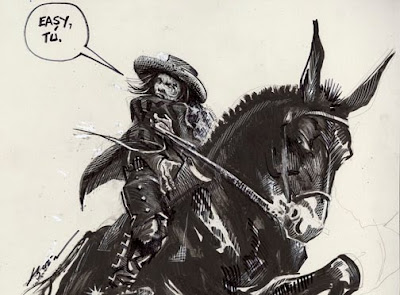 Yes, the Mickster (seen here reaching for his Sharps rifle) rode a mammoth Jack, 16-hands-high. He is a handful, to say the least. Mick calls him Tu, which is Spanish for "you."

Sometimes I feel foolish, spending so much time trying to accurately capture these two stubborn, gnarly Western characters, but I take heart in something one of my art heroes said:

"I have struggled with every angle of the composition and while I have some beautiful passages, the painting as a whole does not possess a moving quality. Some days of the last month I worked on after dark, in the studio, with electric light always on this same picture of the Rio Grande Canon then I would eat my supper at 10:30 at night. And one day I was so interested, or struggling so hard, that I did not eat any lunch, but continued to paint until dark.—These are all intimate details of how foolish a painter can be, even at sixty years of age. If I get a good picture as the result of my efforts, I am happy. But sometimes even after several months' work I have to give it up, and burn the canvas or destroy it."
—Ernest Blummenschein
Posted by Bob Boze Bell at 10:37 AM