August 20, 2010
I watched the director's cut of Blade Runner for the second time last night (two different commentary tracks, one by the special effects guys and the other by the screenwriters and producer-types). Learned a ton. Going to watch the actual movie tonight.

What I Learned On My Summer Vacation
I haven't gone back to school in the fall since 1970 but I still have that sensation in late August about what I made of my summer. And, every year, without fail, I'm filled with a vague hope for a new beginning on the first day of school (this time I'm going to be confident and the girls are going to really like me!).

Anyway, I traveled quite a bit this summer, met some pretty dynamic people and actually learned a thing or two. The highlights:

• Every day get your heartbeat up to 220, minus your age. All you need is one minute of this. The Cleveland Clinic doctor, who told me this, says all the rest is muscle tone, but for optimum health, this is all you need.

• Studies prove that two daily glasses of red wine are beneficial to your health, but it isn't the red wine, it's the alcohol. Doesn't matter what kind. What is probably the most important part is that you limit yourself to just two. The discipline itself seems to have some impact on health. Makes sense.

• Write three thankyou notes a day. The same Cleveland Clinic doctor told me they don't know why, but it increases well being, more so for the sender than the receiver. Amazing. I've been doing it pretty steady for about two weeks and I do feel better (your card is no doubt still in the mail)

• You can be swimming in alcohol but if you take ten deep breaths before you are administered a breath test you will blow a zero.

Went home for lunch and finished three paintings. This one has been around before but I tweaked it to show Mickey Free riding into Los Muertos in a dust storm and blasting three rats in the shadows, while letting another two-legged rat (middle, right) get away so he can lead Free to the rat hole and take out the entire nest: 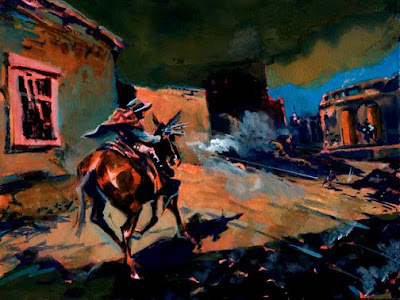 I am getting quite good at spotting my homeland in movies. The previews for Piranha 3 show quick scenes of a desert river and the first time I saw it I thought, "Man, that is either Bullhead or Lake Havasu." Turns out it's Lake Havasu. Love this quote from a local who worked on the film which opens today I believe:


"From what I saw everybody loses their tops and loses their toes, and not necessarily in that order."
—Todd Taylor, Jokers Wild Productions
Posted by Bob Boze Bell at 3:16 PM