August 9, 2010
Worked most of the weekend on the new department in True West to be called Graphic Cinema. Doing the incident in the Sierra Madres that led to Mickey Free riding a mule.

Did this scene on Saturday: 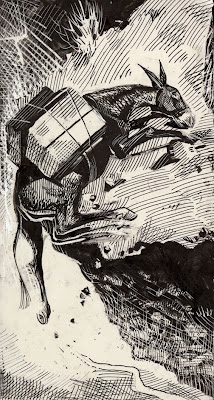 Saw a couple movies: "Winter's Bone," which I really liked, "The Other Guys" which was fun but very spotty (several times, the buddy-cop-farce with Will Ferrell and Mark Walhberg literally stops dead), and last but certainly not least, Akira Kurosawa's "High And Low," made in 1963, a police procedure noire. It's long, two and a half hours, but I watched it twice, once with subtitles and once with the commentary track. Trying to learn something.

"The greatest discovery of my generation is that a human being can alter his life by altering his attitude."
—William James
Posted by Bob Boze Bell at 12:01 PM