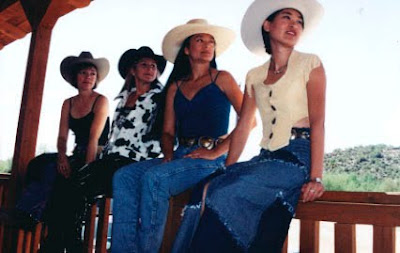 Left to right: Editor Mare Rosenbaum, Sales Rep Suzanne Gunther, Subscription Maven De Anne Giago and Editorial designer Abby Pearson. All have moved on except Abby (who got married and is now Abby Goodrich) who has been with us for nine years. Amazing. All of these women are quite talented and had a huge influence and impact on not only the survival of the magazine in those turbulent times (read my business timeline at BBB Blog if you don't believe me) but they helped put in place many of the systems we still use today.

I salute you True West Babes!

"Show me a successful man, and I'll show you a surprised woman."
—Old Vaquero Saying
Posted by Bob Boze Bell at 4:45 PM