August 21, 2010
This morning I helped my son move into a tiny apartment in downtown Phoenix. My job was to drive his El Camino with a box spring mattress down to the Filmore and Fifth Avenue area while he drove my Ranger with a chair and his personal belongings. His girlfriend Pattara followed in her car.

Memories of the Beast
It was 113 today, so as I motored down into the Beast many hot memories came flooding back. For some reason I flashed on looking at cheesy, gay-nineties, flip cards at the penny arcade on Washington in 1964 when we came down to play Valley teams and stayed at the Palomine Motel on West Van Buren, then walked to the downtown area to take in the sights). Turning onto Filmore I remembered coming up from the U of A to visit Kingman pom pon queen Susan Moore at an old Victorian gingerbread house in 1967. Working at New Times when the offices were on the second floor of the Westward Ho (and also having my first date with Kathy Radina on the first floor of the Westward Ho at a Christmas NT staff party featuring the Southern Tornado, in December of 1978) and, over there, I remember going to a Stay Power revival style meeting at first and Garfield with Steve Burford in 1970. The oil additive franchise offering turned out to be a pyramid scheme, but the motivating film they showed us featured Earl Nightingale and his words changed my life. Behind the Westward Ho, was the building that housed KTAR radio. It was there where I appeared on a talk show along with a spokeswoman from Women Take Back The Night (they had kidnapped 1,000 New Times newspapers and demanded Mike Lacey fire me for a cartoon feature I did on how women who suffer from PMS don't seem to have a sense of humor). When the leader of the group, Chiquita Rollins was asked what she thought of me and my work, she said, and I'm not making this up, "I don't think Bob Boze Bell is funny, period."

All of this sordid personal history happened within a five block area from my son's new apartment.

So, I've got that going for me.

After we got T. Charles moved in we went over to Verde, a new Mexican food joint for a late breakfast and then to a hippie coffee shop for toddies (water soaked for two days in coffee grounds). And then up to the Phoenix Art Museum to see the Cezanne show.

Still wailing on scratchboards, like this one, which I call "One Angry Dude": 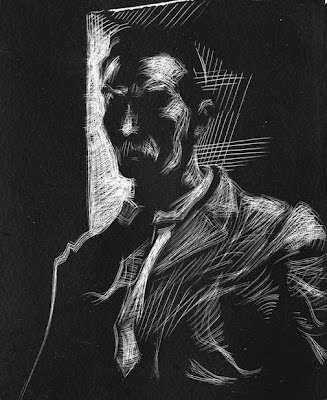 Nice and loose. Wish I could get this lubricated on a consistent basis. Also, here's the chief of scouts at San Carlos when Mickey Free chased down the Apache Kid: 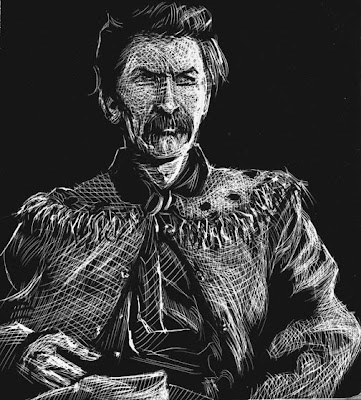 Anybody know his name?

"Mickey Free is half Irish, half Mexican and all son of a bitch."
—Al Sieber
Posted by Bob Boze Bell at 3:29 PM