August 24, 2010
Robert Ray and I are still wrestling with the Graphic Cinema layout dilemma (goes to press tomorrow). Rather that try to blend my scratchboard art in four-color (very, very difficult to hold those tiny scratches on press in four layers of color), we have opted to put a tone on the scenes, matching the color images. Still leaves the problem of word balloons. (stark white or a subtle tone of the background color?)

Got this in today: Oregon-California Trails Association honored True West Magazine with its Distinguished Service Award, presented to our contributing editor Candy Moulton, on August 11 in Elko, Nevada. If you want to get more details from Candy, her # is 307-327-5465. Her e-mail is candywwa@aol.com

Here are a couple of scratchboards from my files. First up The Sweeper: 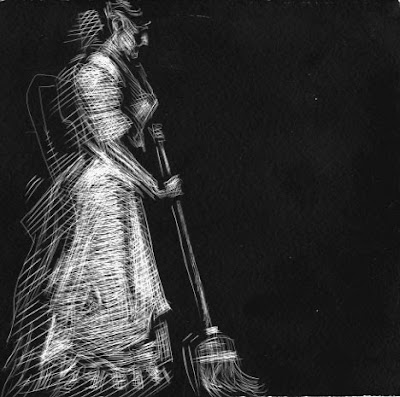 Kind of has a sweeping movement to it, no? Also, here's a controversial image of Custer in death, with a bullet hole in his left temple. 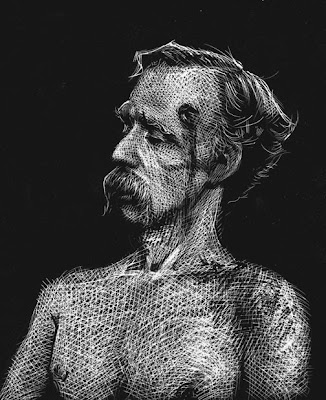 Did he commit suicide? Did one of his troopers do it for him? Or, was it a coup de grace (blow of mercy) by a comrade of Crazy Horse?

"Funny how people look for a person to blame for something that's everybody's fault."
—Al Sieber, as imagined by Paul Andrew Hutton
Posted by Bob Boze Bell at 10:35 AM