August 12, 2010
Who needs interns when I have you! This morning I posted a question as to the origins of the term "skivvies," as in "Dammit, my skivvies are on that pack mule!" It sounded vaguely modern to my ears and I wondered if there were any traces of its usage dating back to, oh, say, May 15, 1883.

Well, not quite, but close. Here are some of the results I received from this site and my Facebook account:

"Appeared in December 1918 in the Evening State Journal of Lincoln, Nebraska, as part of a humorous piece under the headline “Boys Will Be Boys — Even in the Marine Corps”: “‘Well, boys, I believe I’ll play a little golf today and not go to the office at all. I’m all run down and need a little hard physical labor,’ declares an athlete in the act of putting on his ‘skivvies.’”
—Jim Pipkin

"No historian real knows for sure. There was a underwear company called Scovill manufacturing that had a new under wear for men that had a grippe fastener. Then there a those who think the word origin is from a Japanese word "Sukebei" used as a greeting to American sailors as lecherous. Or its a Scottish word for underwear worn under a kilt. No one really knows.The date slang use would be around 1902 that word started to be used by the navy and marines. It could also be a Nordic word."
—Tom Boring

A journalist from Las Vegas recommended "longjohns" and "Union suit," and "drawers" got a couple nominations, as did "yunders."

So the earliest possible date of usage would be 1890s, just out of range for my usage. Not sure yet which term I will use. Skivvies is so descriptive and sounds like it's already rank, if you know what I mean. Here's a rough of the context, using long johns instead of skivvies: 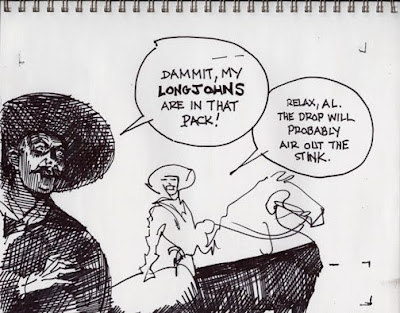 Long johns is good, but not as much fun as skivvies, in my opinion. Hmmmmm.

By the way, "skinny", meaning low down, or the truth, definitely dates from WWII.

"An error which has to be corrected is a heavier burden than the truth."
—Dag Hammarskjold
Posted by Bob Boze Bell at 4:13 PM