August 16, 2010
Geronimo was not a fan of Mickey Free. G-Man was upset with Free because the one-eyed captivo acted as an interpreter at a conference with General Crook. When it was over and Crook laid into Geronimo for not being very responsible, G thought Mickey mangled his words and misrepresented He-Who-Yawns. Mick was probably guilty of adding some editorial emphasis to certain answers, reading between the lines as to what Geronimo intended to say and what he really meant.

Anyway, Geronimo called Mickey Free, "The snake-eye with the forked tongue." Here he is saying that: 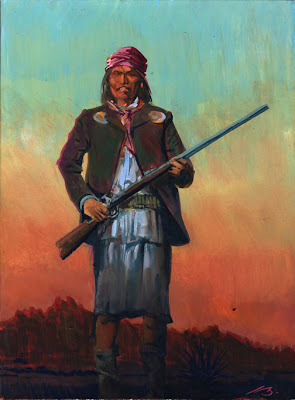 "Be careful cousins, we are living in a time when even right is wrong."
—Mickey Free
Posted by Bob Boze Bell at 9:44 AM