September 24, 2010
Still trying to find the right combo for the bruja scene in the next episode of Graphic Cinema. Meanwhile, the first episode is starting to arrive in subscriber's mailboxes and so far the response has been very positive.

Had lunch today at Tonto Bar & Brill with Roger Pearsall, former drummer for Dick Dale & The Deltones. Always fun talking to him about past gigs and former flames. Roger bought.

Came back to the office and finished up my sketches. 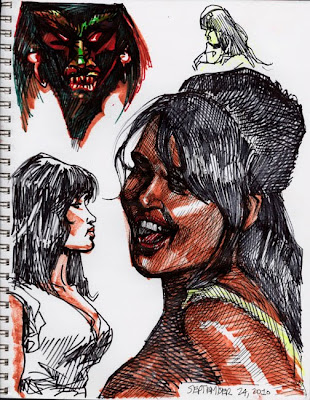 Trying to push the witch part a little farther. Top, left is clear over into the shrunken-head-on-the dashboard witch doctor zone, and perhaps it's a bit too far, but I like the red eyes and may keep that. Stole this off an old Frank Frazetta cover of Heavy Metal (November, 1992). Frazetta was so cool. He pushed it way over the edge. I don't mind borrowing or stealing from the masters because. . .