September 22, 2010
Kathy bought me an iPad last month and I have been really enjoying my Pandora app, which is the radio station site where you plug in artists you like and then the app kicks out songs that supposedly answer the "If-you-liked-that-song-perhaps-you'd-like-this-one" equation. Each artist you put in shows up in a file at left, for example, with the moniker, "Rolling Stones Station" and if that bar is highlighted the songs coming up are in the Stones vein. At least that's the theory. This gets complicated when you also have an "Angel From Montgomery Station" and a "Dick Dale Station", oh, and a "Slaid Cleaves Station". Anyway, the cool thing, besides giving a thumbs down to anything that remotely sounds like Steeley Dan, is that the biography of the artist appears on the right with a picture of the CD cover the song playing came off of.

When I got home from work last night I fired up the iPad and relaxed with a handful of nuts and a glass of cabernet. I sat at the kitchen table and selected the Tom Petty Station and up came an album cover image of Tom and the Heartbreakers standing in a field with some hefty weeds in front of them. That was quite cool, so, as the song played, I grabbed my sketchbook and whipped out a scene with creosote bushes in front of Mickey Free and Beauty (who is following on foot). 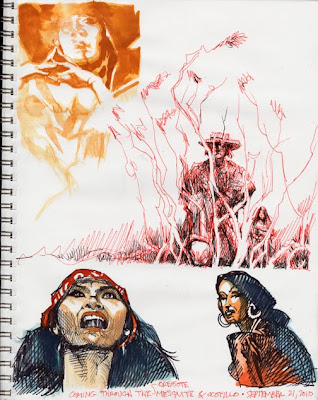 Kind of a cool scene. Thanks Pandora! Still playing with the brujas. I'm thinking of marrying the bottom left witch with the smoking witch at upper left to create a smoking hot witch. ha.

The local Kiwanis club had a speaker cancellation and have asked me to come up to Harold's Corral today at noon to talk about all things True West. Always enjoy these and it's good promotion for the magazine.