September 1, 2010
When I was doing research for the Mickey Free project at Fort Apache, the longtime Lutheran pastor for the White Mountain Apache Tribe, Arthur Alchesay Guenther shared with me a common Apache saying: "You know you're just somehow to me." If you've ever heard Apaches talking, it has an authentic rhythm that is lilting and expressive, even though the meaning seems rather mangled. Posted this on my Facebook page and got this response today:

"I checked with a friend who is a White Mountain Apache, and a school teacher. He explained it thus: "In the Apache language, sometimes there is no word for a particular feeling, and sometimes describing the feeling is difficult as to the... limitation of the vocabulary of the Apache people, so it is much easier to say, "somehow" In Apache (how-shi-un-shteh) that is simpler to say than trying to describe it, sometimes describing it is almost impossible for those who are in the younger generation as their Apache vocabulary is limited.

"As it is used in the above sentence, "you know you're just somehow to me." the best way to describe it is, YOU ARE TREATING ME DIFFERENT FROM HOW YOU NORMALLY TREAT ME, AND I DON'T LIKE IT. I hope that answers your question. Have a great day!! So I guess it's not particularly complimentary!"
—Virgil Alexander

Now THAT is an amazing benefit of social networking. 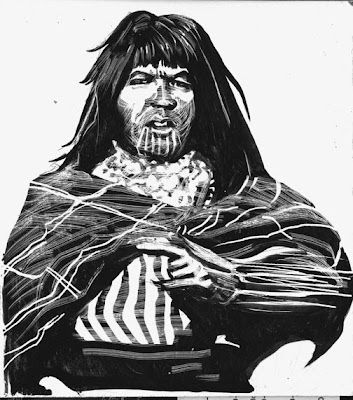 I grew up with many Hualapais and several Mojaves. This is a Mojave Maiden, above, and I can clearly hear her saying as much.


"I never learned anything while I was talking."
—Larry King
Posted by Bob Boze Bell at 10:12 AM