September 15, 2010
It never ceases to amaze me how much old, new stuff turns up in the history field. You'd think that after 129 years everything would have been found that could be found on Billy the Kid and everything that could be said, has been said, but NO.

Author Mark Gardner has found a couple of Billy the Kid articles that are quite intriguing, first up is this National Police Gazette piece from April 8, 1882 on criminals, including Billy the Kid (upper left, mug shot): 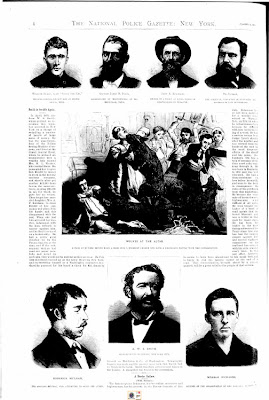 Next up, Mark says: "I came across this rather odd web site that has over 13 million pages of searchable scans from historic New York State newspapers (that's right, 13 million!). So, of course, I had to spend what seemed like hours searching all kinds of fun stuff."

One of the newspaper articles Mark found is an interview with Pat Garrett that sheds some interesting light on Billy's death. For example, Pat says he went "upstairs" in Maxwell's house on the night of the Kid's death. Pat also claims the Kid fired at him first and there are other interesting insights as well, probably the one that struck Mark and me the most is that Garrett says Billy touched his knee! Also note that Garrett had one of the famed tintypes and was making an enlargement for Lew Wallace. In the interview Pat also defends Billy as being a decent guy.


"A generation which ignores history has no past—and no future."
—Robert Heinlein
Posted by Bob Boze Bell at 9:40 AM