September 16, 2010
Went home for lunch and whipped out a color bruja: 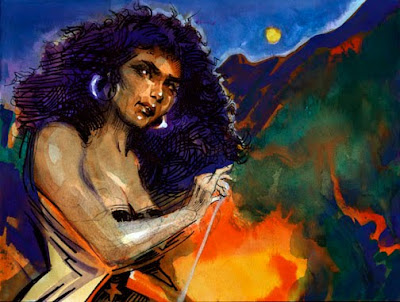 This witch was influenced by the color scheme in a Edvard Munch (the guy who did The Scream, 1893) painting called Mother and Daughter, 1897. Has some potential, although she's not quite nasty enough. She wants Mickey Free to be killed so she's not a very sweet witch. Looks like she had some old tattoos on her arm removed.

"I'm not a nudist, but when you're home with the blinds drawn, it's OK to run around in the buff."
—Erica Durance
Posted by Bob Boze Bell at 3:40 PM