September 17, 2010
Still wrestling with the Mexican witch idea for the next episode of Mickey Free. This morning I whipped out four sketches, running the gamut between The Witches of Eastwick and the witch of Snow White. 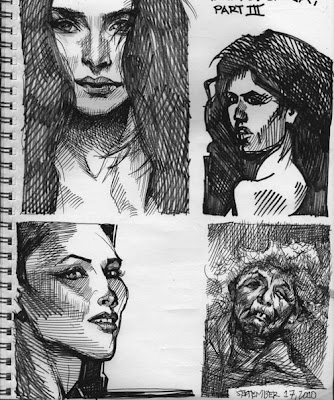 Of course, the last one, La Pucha, really rings true, but I kind of like the old story angle where the witch casts a spell on the beholder and makes him think she is a beautiful woman, until they kiss, then we get the cackle and reality, which now that I think about it, is really a metaphor for marriage, isn't it?


Not really, but you get my drift.


"I just love comedy because life is not funny enough."
—Catherine Deneuve
Posted by Bob Boze Bell at 9:56 AM