September 7, 2010
I have certainly benefited from Robert Utley moving to the Valley of the Sun. When the Arizona Republic ran my very first True West Moment on March 7th of this year I got a very nice email from Bob commending the history and the artwork. When I ran the story of Dilcthe, the Apache grandmother who ran and walked a thousand miles to freedom I got a note from Bob asking for my source. When I ran my take on how Geronimo got his name on August 29: 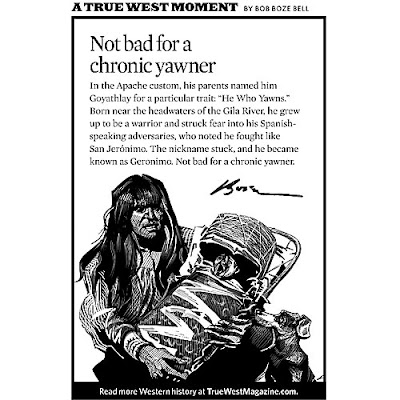 Bob asked my source (he wanted to site it in his forthcoming book on Geronimo). When I told Bob I thought it was the late Apache historian Dan Thrapp, Utley replied:

"Angie Debo connected the name to a fight in Mexico, where the Mexican soldiers corrupted a word they heard from the Apaches. I’m not yanking your chain. If there is a 'footnote' in there somewhere, I’d like to know it. My take has been that, like other Spanish names for Apaches, it’s a common name, the equivalent of our Jerome. I don’t think Geronimo was known by name in Mexico or the US much before the mid-1870s, when Clum grabbed him at Ojo Caliente."
—Bob Utley

Got this additional information from Mr. Utley this weekend:

"In case you are still interested, and in recognition of your disavowal of footnotes, I decided to look up the origins of Geronimo’s name. Angie Debo, the most prominent biographer, tells the story of your understanding of St. Jerome. Her source is Woodworth Clum’s biography of his father, John P. Clum, Apache Agent. Daddy was a blowhard who loaded the New Mexico Historical Review with reams of chest-pounding stuff, either fabricated or grossly exaggerated. Woodworth could not improve on his daddy’s unreliability and is still more unreliable. The chapter that tells the Geronimo story is all fiction."
—Bob Utley

So, I humbly replied, is there any evidence as to where he got Geronimo, the name?

"No. I concede as much in my biography in preparation: 'The ration rolls at Corralitos dated August 13, 1843, bear the name Geronimo. By this time, Goyahkla had assumed the name among the Mexicans and even his own people. He had been a full-fledged fighting man for three years and had ridden with Mangas Coloradas in many raids and battles and proved his stature. Students debate how he came to acquire this name, but it seems to have emerged as a common Mexican name, the equivalent of the English Jerome. Whatever the origin, Geronimo clearly rode close to Mangas Coloradas in war and peace, and he bore that name for the rest of his life.' Of course, if it was a common Mexican name, the guy on the ration rolls may not have been our Geronimo.
So much for waffling. The battle described by Woodworth Clum featured a style of fighting alien to Apache techniques, and while the Mexicans may have known of a Geronimo in the 1850s, when this battle was supposed to have taken place, they did not likely connect a person to it.

"An interesting aside. The Apache language has no word for warrior. All men were fighting men, having been trained from youth. So I’ve had to go through my early chapters and substitute man or fighting man for warrior."
—Bob Utley

"No matter how far you have gone on the wrong road, turn back."
—Old Vaquero Saying
Posted by Bob Boze Bell at 3:45 PM