September 9, 2010
My email has been jammed, won't send. We brought in our tech hero Gerard Jeronowitz, and he unclogged my mailbox and sent out 47 emails that were locked up inside my computer. So, if you get an email from me today that I sent two days ago, you'll know why.

Went home for lunch and whipped out a sketch for a friend of mine. He wants a different view of the so-called O.K. Corral fight and here is one I have been dying to portray: 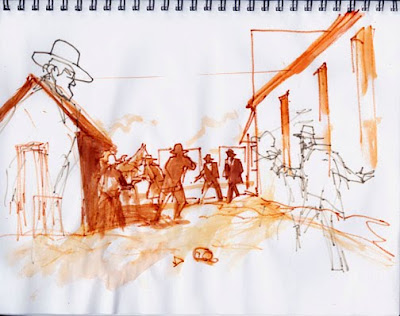 No one, to my knowledge, has portrayed the encounter from the back of the lot, looking north out into the street. This gives a much narrower view than is usually depicted. The fight really was more of an alley street fight than some epic gladiator battle on a football field, or a mining style coliseum. Yes, that is a tin can in the foreground and I will probably have other bits of blowing garbage. I also want to portray the many bystanders who clogged the lot and were desperately trying to bail as the guns came out (although the scale of the bystanders here is wrong and needs work). This is literally The Moment of Truth.