September 20, 2010
Went home for lunch and ruined three boards. Took a break and came back to see if I could save them (always risky and problematic as after three or four layers of paint it all turns to mud, and I already had two layers on the first pass).

Last night I witnessed a spectacular moon, burning through a big cloud over Black Mountain. It looked like the moon was inside the cloud and burning a hole in it. I immediately went into my studio and whipped out a study of what I just saw: 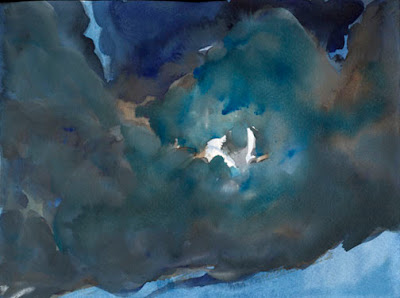 The transitions are too harsh, but the basic idea is sound. So, at lunch today, I bailed into the second failure: 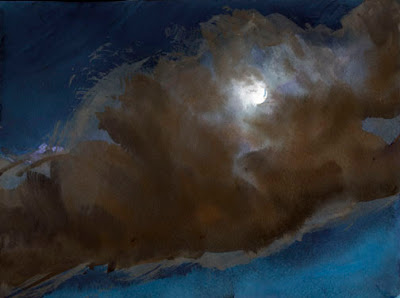 Much more accurate, although the moon in my memory appeared to be locked into a pocket of the cloud, like this: 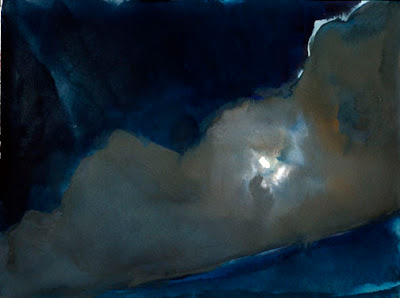 Very, very lucky here. All but counted this one out. Had four, maybe five layers going and when this happens it's like a car running on empty. You are puckered and you wait for the engine to sputter and die. It happens very quickly. All the light goes out of the painting (perhaps in this case that was a virtue, as the cloud effects on the margins went to mud, which popped the center?). Anyway, this is darn close to the effect I saw last night. Whew. Saved by the Bell.

Also took a shot at a moonrise I saw in Kingman last weekend. I call this one Cerbat Moonrise: 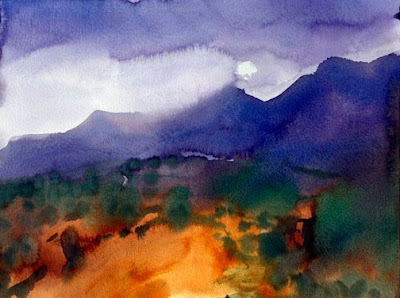 And speaking of my hometown, I couldn't help but notice a couple things strolling down Beale Street on Saturday night at the car show. Is there anyone left in Mohave County who is less than 100 pounds overweight? With less than 15 tats? I realize it's technically still summer but does anyone in the county own an actual shirt or a pair of pants? And do they ever wear them?


I saw one old woman (and, by the way, an "old woman" is any female who is two months older than me) with a bikini string tank top, showing off five tattooed faces across her upper chest area. I couldn't tell if the five faces were supposed to be the members of Journey, or perhaps the Joint Chiefs of Staff, but I might recommend that if you have five faces on your front side, perhaps you don't need fifteen tattoos on each arm? It takes your attention away from the five faces. Maybe stick to several themes, rather than the random school of Tat-A-Tat-Tat. Just a suggestion.


Don't get me wrong, I did see attractive people in Kingman and they were all at Metcalf Park.


"In the history of the internet, no one has ever clicked 'no' when asked if they were eighteen."
—Esquire magazine's New Rules for Men