September 20, 2010
Back from a wild weekend in Kingman. Mickey Campa's Metcalf Munchiefest was a roaring success. Philbert Watahomogie actually showed up and that was a treat. Philbert, half Havasupai and half Hualapai was one of our star basketball players and had never attended a reunion. He said he came just to get Mickey off his arse. Ha.

After the picnic I went down on Beale Street for the Route 66 deal, sold two books, gave aways some mags, watched some belly dancers, then ended up at the new wine bar inside the old Central Commercial building. When Dorian Trahan asked me what I thought of the place, I said, "Well, we're actually in the produce department".

Lots of fun drinking wine with Doris and Bill Goodale and yelling at the band, Family Magic. And, of course I had to help them sing "A Little Help From My Friends" and "The Letter" by the Boxtops. You just have to help when those songs are played.

Woke up hoarse on Sunday, then joined my cousin Billy Hamilton and we went to visit his father, Choc who is 96 and still tells great stories about all the legendary horses he had, like Dammit and Durnit and Shamrock, to name but a few. His wife Florine was there along with Billy's daughter Brenda. Great seeing them all.

Got home last night around five.

Actually got rained on this morning on my walk with Peaches. Felt good. Got soaked, but it was warm enough that it dried pretty quickly.

Still auditioning Mexican brujas for the next episode of Mickey Free. Did these sketches on Saturday morning before I took off for Kingman: 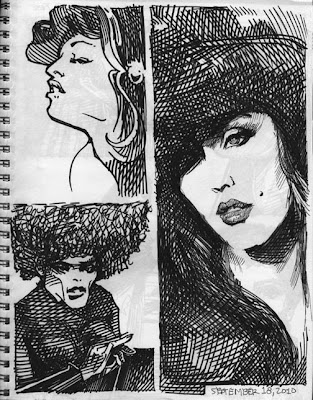 And, did these this morning before I came into work: 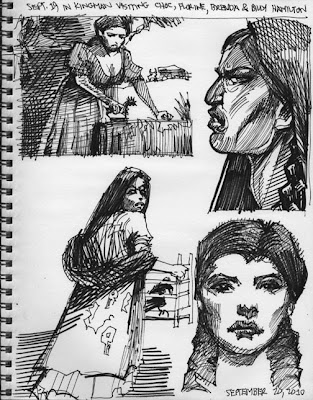 Got into work and worked on a couple projects we have in the works. Got a few obstacles and a few enemies who want to see us fail, but that comes with the territory. Gee, I wonder what ol' Bailey has to say about that?


"Blessed is the man who has a skin of the right thickness. He can work happily in spite of enemies and friends."
—Henry T. Bailey
Posted by Bob Boze Bell at 11:09 AM