September 21, 2010
Can't really do Babes & Brujas without returning to a classic cowgirl I know a thing or two about: in 1977 I created a cartoon character called Honkytonk Sue. She is based on five very strong women: Sadie Pearl Duncan, Mary Hamilton, Bobbie Cady, Patsy Stockbridge and Jean Linn, otherwise known as The Guess Girls. 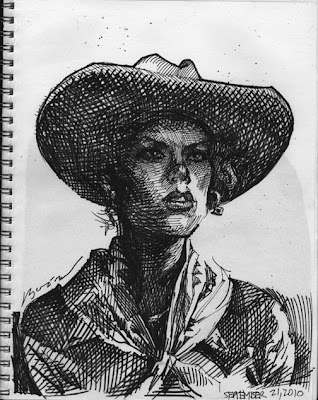 Yes, all five are sisters, and I am related, four of them are aunts and one of them, Bobbie, is my mother. In addition to my direct kin, other Mohave County cowgirls inspired me: Jeri Penrod, Roxie Stephens, Sharon Hamilton and Hanky Bonelli to name but a few. Ironically, the model for the above drawing, was a Moon Valley eighth grade school teacher named Kathy Radina. Ha.


Speaking of Mohave County, someone from my hometown gave me grief for my broadside yesterday regarding the Beale Street fashion scene. I admit it was somewhat rude, but I say to everyone: