A Tower of Borrowed Horses

September 8, 2015
Spent most of the weekend laboring on art. I know, the irony of Labor Day and all, but it is art and I do enjoy it, so is it really labor?

Have an assignment to illustrate a Sherman Alexie poem for Santo Press down at Cattletrack Art Compound. I'm reading a book I bought in Durango during the True West Railfest. It's called "1913," by Florian Illies, as in the year, which I am interested in, because it fleshes out the time period when Wyatt Earp was in LA and I want to know what else was going on at the same time. The short answer is, of course, plenty (the Mona Lisa is stolen, Gustav Klimt is still living with his mother and Hitler is trying to launch his career as an artist). In the front of each chapter is an image that sums up the month (there are 12 chapters one for each month of 1913) and at the start of February is an intriguing abstract of a pile of horses. It's unclear who did it because there is no cutline (Damn you Melville House!), but in the text of the chapter it refers to a painting called "A Tower of Blue Horses" by Franz Marc and I'm assuming this is one in the same, even though it is in black and white in the paperback (thank you Melville House!).

Anyway, with the assignment to illustrate the Sherman Alexie poem, I thought it would be good business to copy it and try to learn a thing or two about the choices made by Mr. Marc. 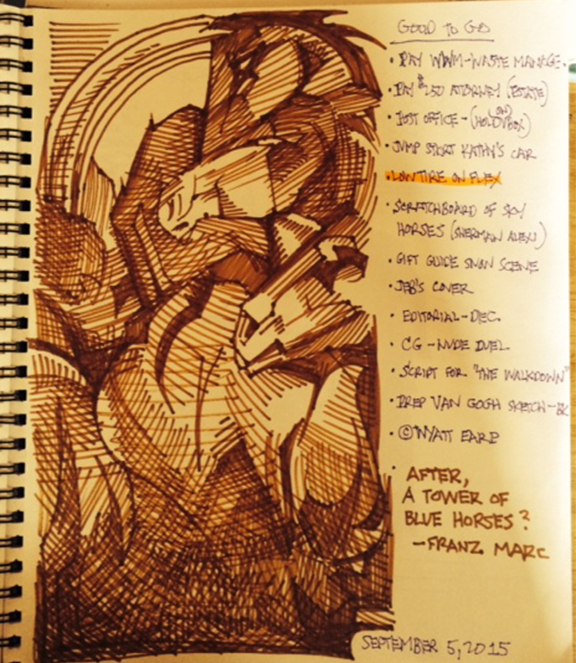 Daily Whip Out: "A Tower of Borrowed Horses"

Also, on this page is my hitlist for my upcoming van Gogh Tour (all the crap I've got to get done before I can go).  As you can clearly see, rather than attack the list, I am doing due diligence sketches instead of getting ready for the van Gogh trip. In my defense, I did air up the tires on the Flex.

Here is the poem:

When a Salmon Tribe Becomes Equine

At my mother's funeral, I learned the three horses

Who escaped their barn years ago have transformed

I hope that my mother has become 401. 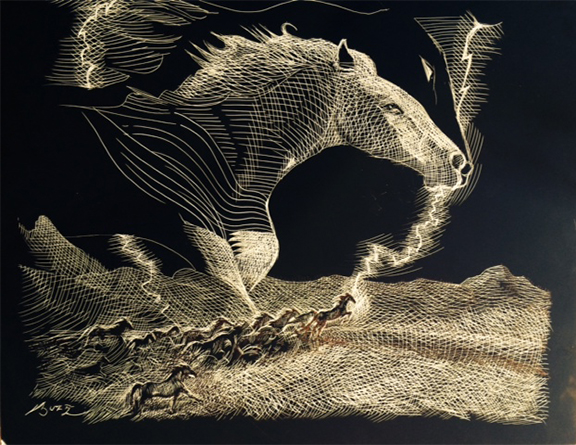 "Some Indians believe that to give your name is to put yourself in a stranger's power."
—William Least Heat Moon