September 29, 2015
My goal on this trip is to stand where he stood, see what he saw and feel what he felt (short of feeling the syphilitic symptoms).

One of my favorite van Gogh paintings is of the Langlois Bridge on the outskirts of Arles, France. It portrays a very complicated draw bridge apparatus, stripped down to basics and placed in a beautiful complimentary color-schemed design. For several days, in 1888, Vincent hiked out to the site of the draw bridge, which is about a mile from The Yellow House where he was staying. He did numerous drawings of it and several paintings. This is the classic version and my favorite: 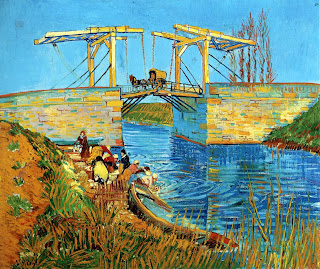 
One of the first things I did when we landed at Arles was to go to the Tourist Office and ask where the site of the Langlois Bridge is. In English, heavily laced with a strong French accent, the woman told me where to go, showing me on the map, but, she added as an aside, the "actual site" is over here. This sounded like, "Le auct-chew-wol mizzen-seen es oh-vehr heer," Whoa! You mean the bridge I'm going to hike out to is not the ACTUAL Langlois Bridge that van Gogh painted? No, apparently it's not. It was either rebuilt on the other site farther south of town, or recreated from scratch at the new spot. 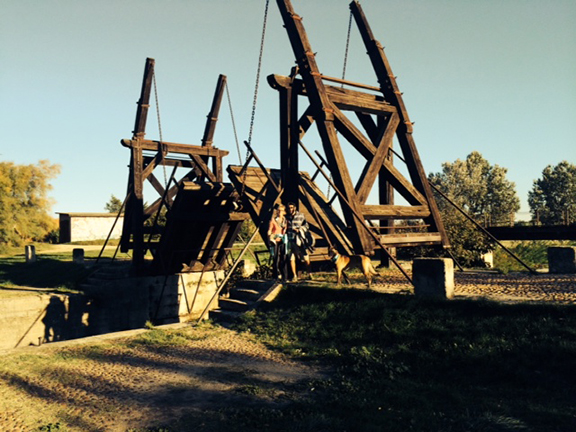 Dan and Darlene Harshberger and a stray dog we named "Vincent" at the "new" site of the Langlois Bridge. 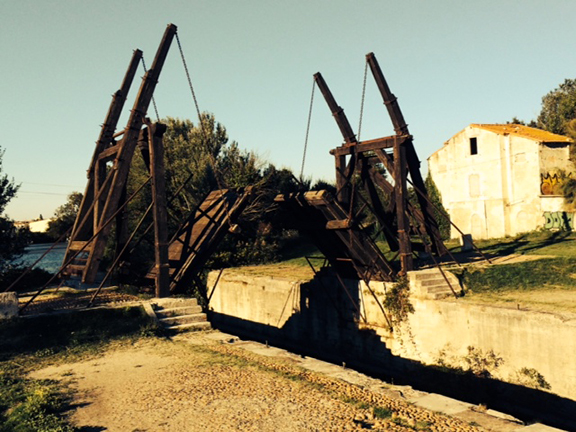 The alleged Langlois Bridge with the draw bridge up
(it appears rather permanently up).

The wooden struts seem heavier than the painted version and not quite as delicate, although that could be an artistic license deal. Fred Nolan sent me a photo he took in the 1960s of the Langlois Bridge and it is much closer to the painting. 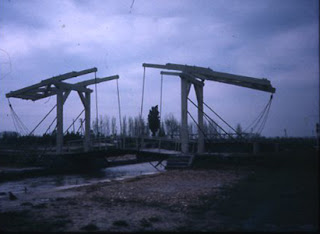 Fred Nolan snapshot of the Langlois Bridge in 1960s


Either way, the one we saw is not the actual Langlois Bridge and for a Western history nut, it's tantamount to saying, "You can drive to Sierra Vista and see the O.K. Corral."

"You must set it down all down at once. Paint in one rush, as much as possible in one rush."
—Vincent van Gogh
Posted by Bob Boze Bell at 10:31 AM