September 24, 2015
I've had at least 50 shoutouts from the Dutch, Belgians and now the French and every single one of them says, "TEXAS!" or "HEY TEXAS!" or "TEXAS?" Talk about owning a brand. When I tell them no, I am from Arizona they seem so disappointed (mainly that they guessed wrong). Funny how Texas owns the cowboy hat in the view of the world. Makes sense, but still kind of weird to a Westerner. 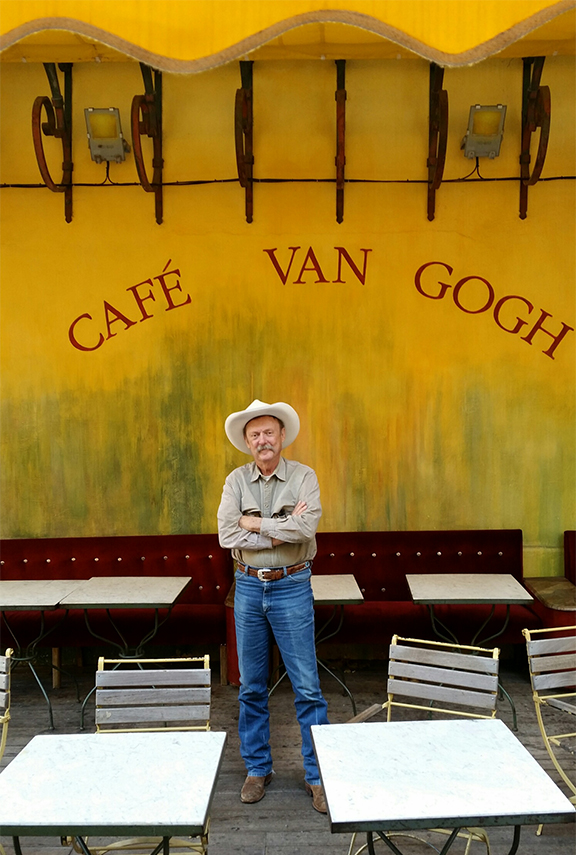 BBB in front of the Cafe Nuit (The Night Cafe), scene of a famous van Gogh Painting.

We took off from Paris yesterday morning at Gard de Lyon (Lyon Station) on a bullet train heading south down the center of France. It is the same route Vincent van Gogh took in February of 1888 as he made his way from Paris to Arles in the south of France. It took Vincent a day-and-a-half by train, and it took us three hours to cover the same distance. The high-speed train is electric, very smooth and silent. The only interruption is when we met other trains, also going between 150 and 200 mph and then there is a swoosh and a vortex interruption-like vibration, like an incoming rocket going by your ear, Startling the first time you experience it, but by the third hour, it's kind of soothing in a we're-going-awful-damn-fast way.

We're spending three full days here and we've rented a little house with three floors and a very narrow, steep staircase leading to the top "penthouse" which is actually a miniature crow's nest with a low ceiling where the Ds have parked themselves. My big goal for today is to see the actual Langlois Bridge, which is about a half-mile walk from here. Pics to follow.

"When,  for instance, you are painting a landscape, don't leave out the rain just because you've started with thesunshine."
—Henri Matisse