No History On The History Channel

Finishing up all my tasks before I leave on the van Gogh Art Tour on Friday. Our editor, Meghan Saar, requested a spot illustration to go with Mark Boardman's December column on "The Outlaw Davy Crockett." Most people don't know there was another Davy Crockett who came later, out of Texas, who was a bad man. So, this morning I whipped this out: 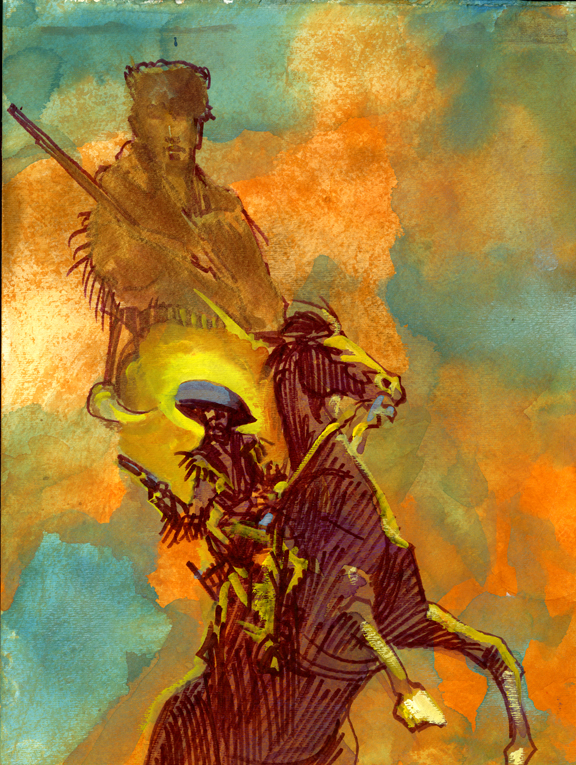 Daily Whip Out: "The Good And The Bad Davy Crockett"


Stephen Colbert's first show rocked last night. Best line: "This is an historic moment, but like most history it's not on the History Channel."

Our former COO was in on the founding of the History Channel and the story, as I remember it, goes like this: ABC and Hearst teamed up to create the History Channel and the creative team at ABC came up with a comprehensive plan to launch the channel with a budget of $20-some million. Hearst said "No way," and the head guy went to England and got a slew of WWII documentaries for free and they ran those around the clock, thus giving rise to the quip that the History Channel was "All Hitler, all the time." Fast forward to about ten years ago when the ratings started to peak (or sag, depending on who's telling the story) and the consultants said the future was in original programming and reality shows. So then we get the erosion of actual history and more shows like "Ice Road Truckers." Eventually, almost all the history is gone and only the name remains. This is happening all across cable: MTV plays very little music and the Weather Channel is moving away from weather. Yes, the WEATHER CHANNEL is moving away from weather! Not sure what this is signaling other than the end of the world as we know it. But that's too harsh since the world always seems to be going to hell in a hand basket, but never quite does, yet.

"Things are not as bad as they seem. They just couldn't be."
—Old Vaquero Saying