The Enduring Influence of Joaquin Jackson

August 29, 2106
I went to see Hell Or High Water a couple weeks ago and I must say my son almost ruined it for me, but then, he saved it.

"Don't bother," T. Charles emailed me from Thailand, when I told him I was going to see the film. He actually saw it the night before Kathy and I went to see it. This was the week it opened here in Scottsdale. Yes, they often get new movies in Thailand, sometimes before they're shown here. When we visited them two Christmas's ago, we actually saw The Interview which was held from release in the U.S. but not in Chiang Mai.

Anyway, the local Arizona Republic movie critic, Bill Goodykoontz gave Hell Or High Water five stars and I was very excited. In his scathing critique, my son admitted the movie opens strong, but that the five stars only lasts for about the first ten minutes and then it bogs down and, I'm quoting him here, "The acting is horrible."

I'm actually glad he said this, because it lowered my expectations and I ended up really enjoying the dang thing—sometimes when you go into a movie expecting five stars it can really be a curse and a letdown. Anyway, I'm happy to report, it's a solid Western!

My son's distaste at the hammy acting, I think, is aimed at some of the minor characters who, I have a hunch, were hired to go against type: they appear to have hired locals (it was filmed in New Mexico) and I have to admit sometimes the "acting" was a little challenged. A waitress looked grizzled and authentic, but she really couldn't act and you could almost see her reading her lines. And a pretty bank teller about half way in, was pretty, as in pretty weak.

Meanwhile, Buck Taylor has a memorable cameo. (Actually that's redundant, when does Buck NOT have a memorable cameo? He was the best thing in Cowboys & Aliens) Here, Buck plays a west Texas cowboy in a bank that's about to be robbed, and he's heeled. I won't spoil it, but he is a joy to watch. Just damn authentic in every way.

Jeff Bridges is also excellent as a Texas Ranger and if his portrayal seems somewhat familiar, it's no accident. Like Nick Nolte before him, Jeff went to the late, great Joaquin Jackson to get the look and to get the attitude of a modern day Ranger. Jackson passed June 15 and we did an obit on him in the magazine, but we are planning a bigger tribute in the next issue.

As for Kathy's ex-boyfriend—yes, Ms. Radina once dated The Sexiest Man Alive—Nolte also made the trek to Joaquin country which is in the Big Bend area of Texas. Here is my blog post from ten years ago when I actually got to meet the legendary lawman:

February 25, 2006
Got to have breakfast with a living legend this morning. Joaquin Jackson, Texas Ranger and best selling author (his first book “One Ranger” is in its sixth printing and he’s working on his second), picked me up at the Museum of the Big Bend on the Sul Ross State University in Alpine and took me downtown to the Holland Hotel for breakfast. Joaquin is six foot four and quite imposing, and as we walked into the restaurant, you could see the heads turn and hear the whispers.
Nick Nolte played Joaquin in the movie “Extreme Prejudice” and spent several weeks hanging with the ranger to get down his speech and mannerisms. “He’s a damn good mimic,” Joaquin said with a laugh. “He had down all of my mannerisms.” Joaquin told me plenty of great stories but the one that stopped me short, was when I asked him if he ever ran into any oldtimers who knew King Fisher (see Classic Gunfights, Jan-Feb 2006 True West). Joaquin smiled and said he was at Ulvalde when they dug up King in the mid-1960s. He said King Fisher had a glass window coffin and he still had his mustache in place and a nice black suit.
At ten the local newspaper took a photo of Joaquin and me in front of the museum.
Liz Jackson (Joaquin’s daughter-in-law) introduced me and gave True West a big, Texas style plug at their auction. I said a few choice words and thanked everyone.

According to Joaquin, Nolte spent three weeks in Alpine, Texas shadowing the retired Texas Ranger, learning the day-to-day activities of a typical Ranger. Jackson admitted to me he was stunned at how accurate Nolte was at capturing his manner of speaking and even his walk.

The resulting movie, Extreme Prejudice (1987) was allegedly an homage, or remake of The Wild Bunch.  Both films end with a massive gunfight in a Mexican border town. The title comes from "terminate with extreme prejudice" a phrase made popular by Apocalypse Now, which was also written by John Millius.

Both Extreme Prejudice and the just released Hell Or High Water, utilized the experience of the "Hollywood Ranger," as some came to refer to Joaquin, but not to his face. 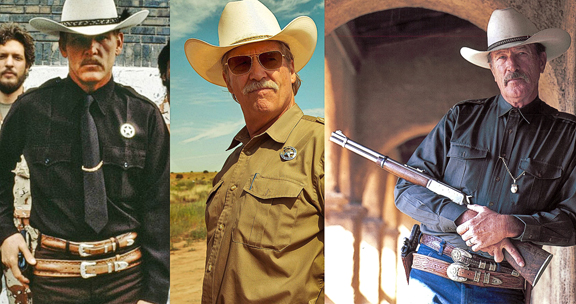 The Three Joaquins: Nick Nolte, Jeff Bridges and the guy they were channeling.

Ultimately, I had to take my son to task for his review because even if some of the acting is a little thin, this is a movie featuring the best badass in movies working today: Ben Flippin' Foster (you may remember him as the prissy gunman in 3:10 To Yuma.)

Ben Foster On How He Created His Role
Ben Foster said he wanted a rabbit tooth to help him portray Tanner Howard, the ex-con, volatile, bank robbing brother in "Hell Or High Water." He tells The New Yorker why he wanted a rabbit's tooth for his portrayal: ". . .a rabbit tooth made sense, because the two influences I looked to for Tanner were Bugs Bunny and Waylon Jennings. Bugs because of the rascal, and Waylon because Waylon was, like, 'No matter what, we got this covered.' He was a man of joy, just like Bugs was a wabbit of joy."
—Ben Foster

The film is worth seeing just to watch Ben Foster do his genius—crazy wabbit—thang.

"History is the sum total of the things that could have been avoided."