August 23, 2016
On the hunt to finish the final for Wild Bill Hickok feature. First, I gathered all of my reference material, which included a photo session I did with the artist Jerry Crandall a decade, or so, ago. He had the rig and the outfit and I shot off a roll of film in our back yard for future reference, and here we are. 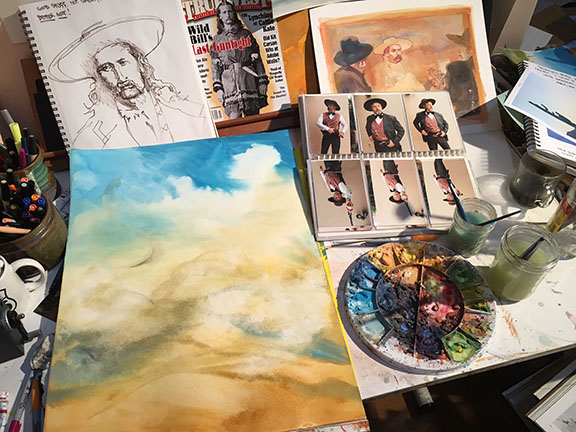 Daily Whip Out: "Wild Bill In Progress No. 1"

In this first phase I am just trying to nail a background of sky, ground and smoke (swirling from the barrels of his Navy Colts). I haven't even put the main figure in yet. I'm just auditioning backgrounds at the moment. 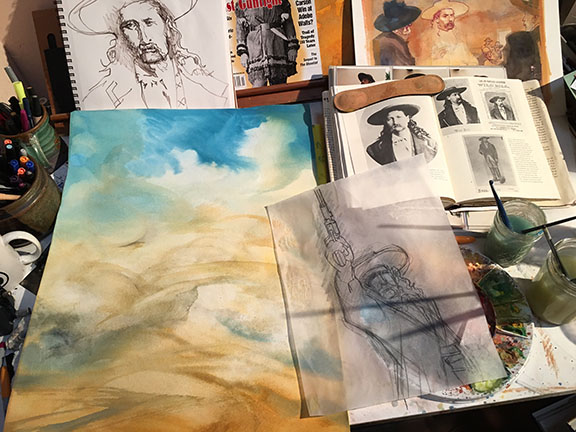 Daily Whip Out: "Wild Bill In Progress No. 2"

Added more smoke and toned back the upper area. Clouds were too raw. Also hauled out the prime facial reference, which is in Joespeh Rosa's classic book, "The West of Wild Bill Hickok."

Semi-Funny Sidebar
I brought the book home last night from the office and had several things to bring in the house, including mail, sketchbook,  paperwork from Carole, etc. For some reason I put the Rosa book on our adobe wall by the front gate and then promptly went into the house and forgot to come back out and retrieve it. Of course, it rained last night and I went out for my walk and there it was, a limp mess of stuck together paper. The good news is, I own two copies of the book, so this one is basically ruined, but I got a semi-funny story out of it.

Also, did a tight sketch of the figure on tracing paper and when the paint on the background dries, I'm ready to position the main figure. Nervous. This is the moment of truth. If the figure isn't anatomically correct, everything dies and it's a very ambitious pose, with the foreshortened arm raising a pistol, with Hickok in a gunfighter stance, all very complicated.

As to the anatomical deal, the verdict is still out (see previous sketches from yesterday's post) But, I'm hopeful. I also have a Design Review meeting in two hours so I'm under the gun (ahem). 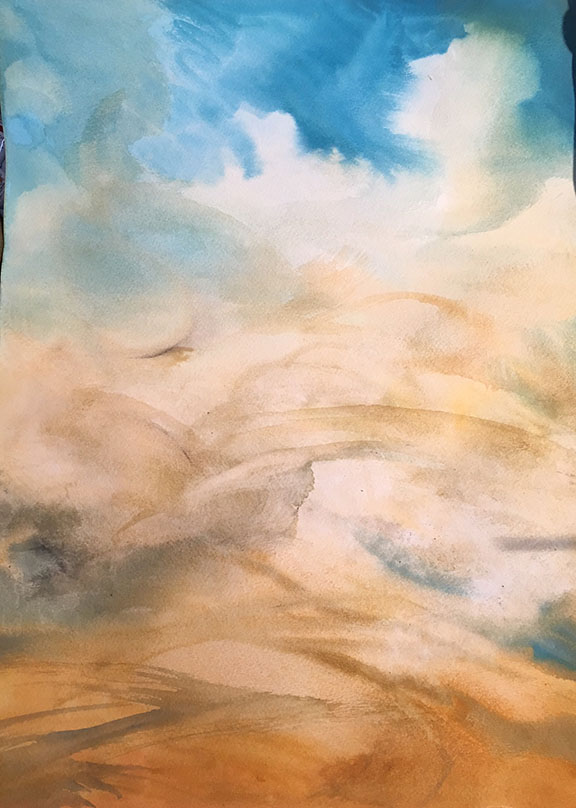 Daily Whip Out: "Wild Bill In Progress No. 3"

The trick will be to feather in the figure of Wild Bill but not kill the subtle gunsmoke swirling around him. Normally I would build this from the ground up with the figure already in place, but I knew the figure would intimidate me into compromising the smoke. Ideally he should be surrounded by gun smoke, with the curls and whisps of the smoke eating away at his arm and midsection. Ideally, he should appear almost ghostlike. This is working it in backwards which I gravitate towards because of my scratchboard work, but it also has its drawbacks as well. I have dodged one problem only to run into another: the gun smoke can intimidate the figure, or, I should say, intimidates me. It takes courage to dive into something like this, rather than, say, write up a blog post about having the courage.


"If you knew what a wholesome regard I have for damn liars and rascals they would be lieable to keep out of my way."
—James Butler Hickok
Posted by Bob Boze Bell at 8:28 AM