Wild Bill Was The Nemesis of "Nervous Men And Timid Women"

August 31, 2016
Finishing up our big Wild Bill Hickok package for the November issue of True West. Pulled out an earlier study and give it another layer. I'll probably use this on my editorial page to illustrate how the tall tales about Hickok sent his legend soaring. 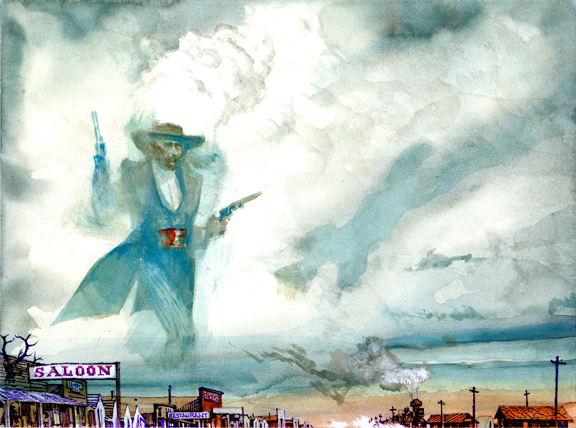 
The Nemesis of Nervous Men and Timid WomenThe myths about Wild Bill Hickok are legion, but  it must be saidHickok himself sowed some of the seeds that grew into the myths thatsurvive to this day. His sister Lydia remembered in 1915: "I have tolaugh when I read James' stories  for when we were children he wasalways telling just such yarns to amuse the rest of us." She went onto say, that James swore that one day he would do things that KitCarson "never thought of doing." He certainly achieved that goal. Healso had a good sense of humor. After telling a particularlyoutrageous story, someone would invariably ask him, "But Bill, how didyou escape?" Poker faced, Hickok would reply, "I didn't. I waskilled."As for his name, "Wild Bill" was a common appellation given to anywestern character who was acting out. Joseph Rosa writes of oneresearcher, Waldo E. Koop, who claimed to have found reference to morethan 30 individuals known as "Wild Bill," on the frontier, so it wasquite common at the time. And speaking of names, Hickok was knownaround Rock Creek as Dutch Bill and some writers claim he was alsoknown as "Duck Bill," allegedly because of his prominent nose.As Rosa put it in his introduction to "Wild Bill Hickok: The Man & HisMyth",  "Even today, attempts are being made to turn Hickok into somekind of a psychological freak, adding facets to his character andbehavior that were not evident during his lifetime." So, we haveJoseph G. Rosa to thank for ferreting out the hard truths about amythical character who actually walked the earth as flesh and blood.Thanks to Joe, we now have a better understanding of the real WildBill. Thanks Joe.Wild Bill And The LadiesAs for the ladies, more than a few were enchanted. "He was really avery modest man and very free from swagger and bravado." claimed LibbyCuster. In 1871 Hickok met his future wife Agnes Lake Thatcher, widowof a circus owner. She fell in love with him and after several yearsof correspondence they married on March 5, 1876 at Cheyenne, Wyoming.Wild Bill had five months to live.


Fast On The Draw  There is a current perception, widely accepted, that Hollywoodcreated the "fast draw" but here is a contemporary comment on Hickok'sspeed:

"The secret of Bill's success was his ability to draw and dischargehis pistols, with a rapidity that was truly wonderful, and apeculiarity of his was that the two were presented and dischargedsimultaneously, being 'out and off' before the average man had to tothink about it. He never seemed to take any aim, yet he never missed."—Chicago Tribune, August 25, 1876

Too Bad There Were Also Dime Novel Claims Like This:

"I would be willing to take my oath on the Bible tomorrow that I havekilled over a hundred, a long ways off."—Wild Bill, as quoted by a creative manure spreader
Posted by Bob Boze Bell at 3:52 PM