August 27, 2016
Okay, so Dan Harshberger came up with a semi-decent cover based on an earlier version of my Wild Bill Hickok failed painting. When I was doing the painting, at key points, I literally stood up and took a photo of the artwork with my iPhone. I didn't use spot lighting or even drag it outside for better lighting, I just took the photos hovering over the painting in my dark studio, then went back to work. Well, Dan The Man was able to take one of these earlier phone shots to create a decent cover concept (turns out, according to Robert Ray, my iPhone takes better quality photos than our expensive True West camera). In other words, I found the "in progress" photos on my phone and sent those down to Dan and he took one of them, below, and made a possible cover out of it.) 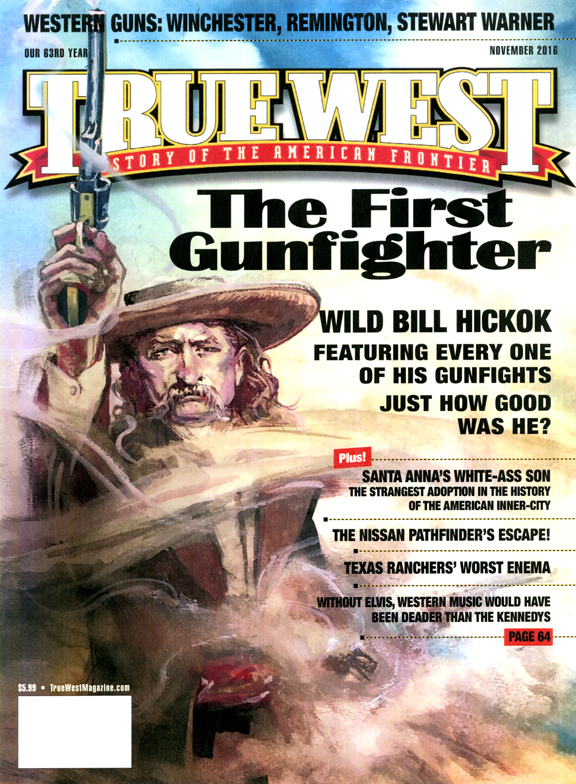 Remember, a couple days ago, when I mentioned that Dan Harshberger likes to put in ridiculous cover headlines to fill space? Notice anything odd about the headlines in right hand corner? Texas Ranchers' Worst Enema"? "The Nissan Pathfinder's Escape!" See what I have to put up with?

We are featuring one of Wild Bill's pistols from the Cody Firearms Museum in Cody, Wyoming and that will be the top head. I realized we could point to the pistol and then it hit me, why are we showing the undercarriage of his pistol? That led me to this design idea: 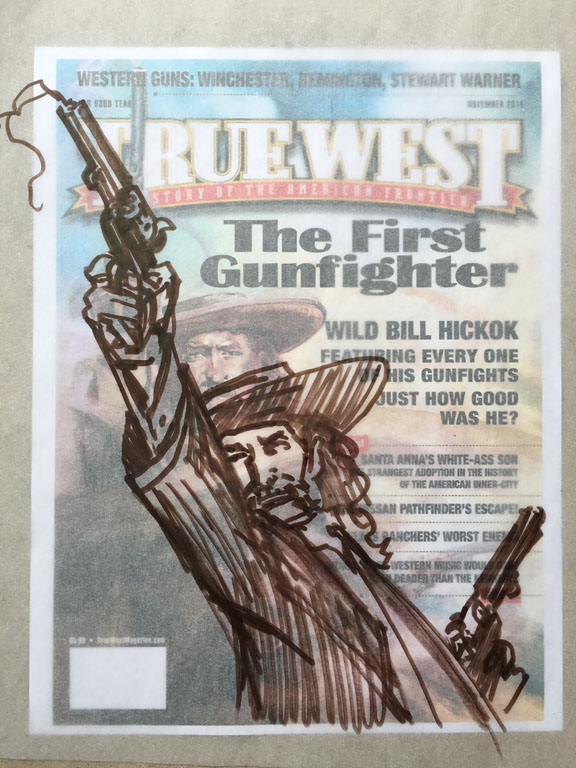 This time I need to have a stronger sketch to work from. Thanks to Joseph Rosa I have plenty of good photo reference on the Prince of The Pistoleers.  Got three sketches going this morning and will post progress. Wish me luck.

"Wild Bill Hickok proved on many occasions that he was not gun shy, and as evidenced by the number of his photographs that have surfaced, neither was he afraid of the camera."
— The late Joseph G. Rosa's opening comments in his classic book "The West of Wild Bill Hickok"