August 4, 2016
In the early morning light, a group of Apache boys are running up the slopes of the Graham Mountains. They are on a quest. 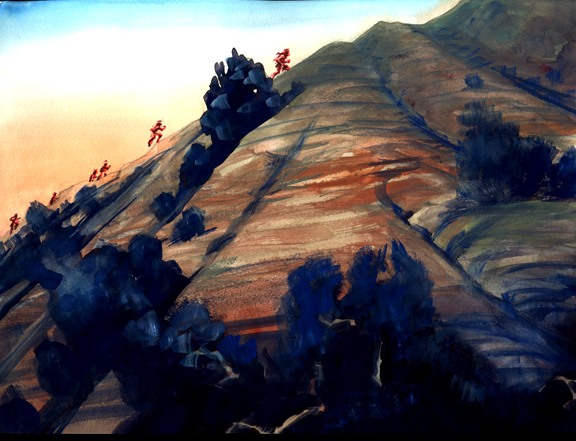 Daily Whip Out: "The Pinecone Seekers"

The task is simple. Each boy training to be an Apache warrior must gather at the river bank at dawn, take a gulp of water and hold it in their mouths.

Then the entire group runs towards the blue ridges of the Graham Mountains.

It is not only a race, for the goal is to snatch the first pinecone they can find, return to the river and drop it at the shaman's feet. Then they can spit out the water.

The drill teaches the boys to breath through their noses, which expands their lung capacity and instills in them a strong discipline to cover great distances with ease. And it makes them almost invincible in the annals of Southwestern warfare. While the U.S. Army cavalry is touted for being able to cover 25 miles a day on horseback, the Apaches, on foot, can cover more than 75 miles. No wonder they were rarely seen, much less caught.