August 24, 2016
On the third phase of possible Hickok cover art. Got out on the road at six and got in a brisk walk up Morningstar. Saw some cool sunrise shot which I'll post later. Got back to studio and bailed in at seven. Did some excavation on the face. His left eye is still a tad too close to nose, need to stretch socket out to the right. Locked down forward hand and added smoke along bottom by actually removing paint with a wet paper towel. That tweak gave me a new title: 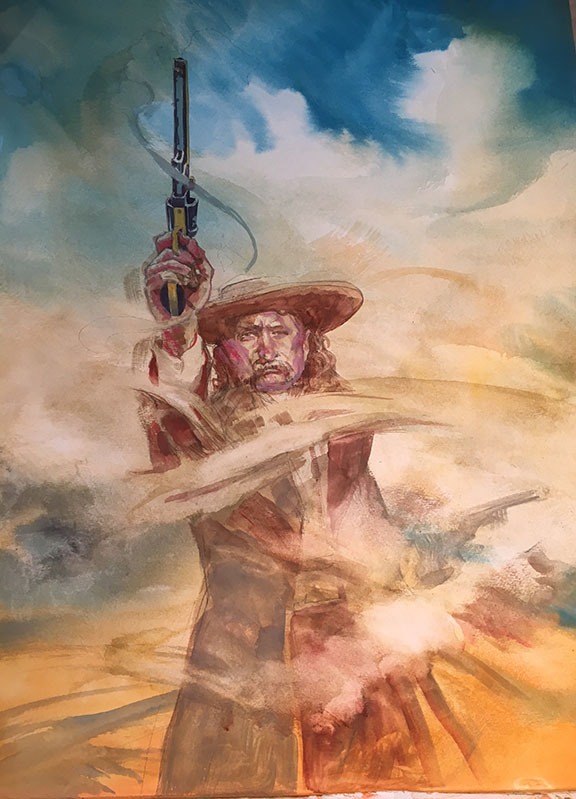 "Wild Bill Advances Through the Smoke."

I'm avoiding the left hand because that is a difficult angle to draw a hand holding a pistol (that's why there is such heavy smoke in that area. How convenient!)

Knuckled down and "finished" at 8:40. Now to get dressed and go into the office and scan this sucker. It's big: 17.75 X 24 inches, which won't fit in the scanner. Robert Ray tacks it up to the wall next to his desk and shoots a photo with the True West camera, then that is downloaded into photoshop and sent to Dan The Man to see if he can make a cover out of it.

"Art is certainly not a pursuit for anyone who wants to make money. There are ever so many other ways."
—Robert Henri