Dead Man Waiting For A Train

September 30, 2016
Still working on the History of A Scene, a new feature for 2017 where we are going to take a famous Western scene and give the back story, or, the history of how it came to be.

Dead On Arrival
In the opening sequence of Once Upon A Time In The West, there are three gunmen who show up at the train station. "Stony" (Woody Strode), "Snaky" (Jack Elam) and "Knuckles" (Al Mulock). Towards the end of the four day shoot Mulock jumped from the balcony of his room on the second or third floor of his hotel room in Gaudix, Spain wearing his costume. Mulock survived the fall, and before being taken away by an ambulance, Sergio Leone shouted, "Get the costume, we need the costume!" Mulock suffered a pierced lung from a broken rib and during the bumpy ride to the hospital he died. Sergio outfitted a crew member to finish the shoot and in several of the iconic shots of the trio standing on the platform you can see "Knuckles" looks a little off. 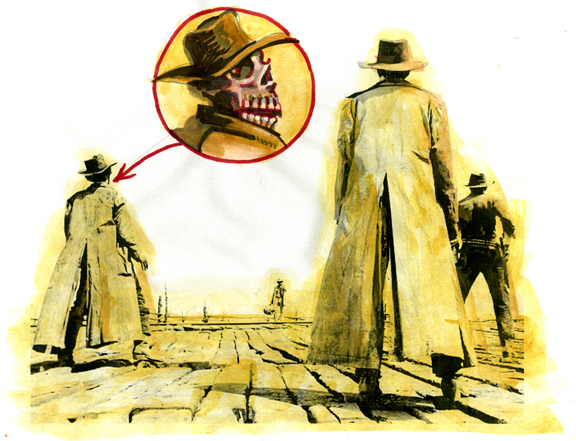 Daily Whip Out: "Dead Man Waiting for A Train"

"Knuckles" at left. Is it Mulock, or is it a crew member wearing his outfit?   No one knows the reason for his suicide, but one of the crew members later claimed Mulock was a drug addict and committed suicide out of desperation, because he couldn't acquire drugs in the isolated location where they were filming.

"The needle and the damage done."
—Neil Young