Triple B And Johnny D Present "The Dude Wrangler"

September 24, 2016
Some time back I was contacted by the legendary music-history archivist, John Dixon, better known around here as —Johnny D—who, as it turns out, wants to give a gift of old time, authentic Arizona cowboy music to our True West readers. Johnny asked me if I would do the CD cover and so this past weekend I whipped out four different versions. 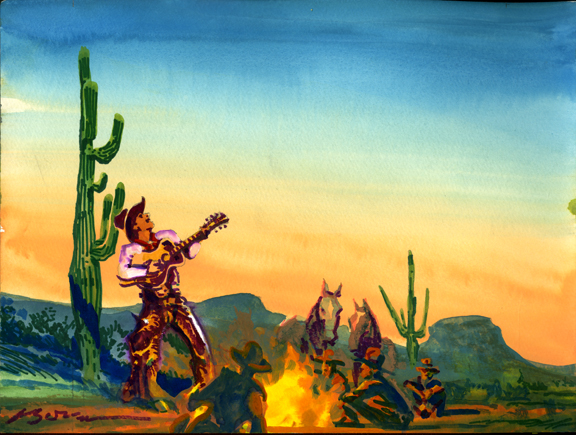 Here, let me have the man behind the project himself, tell you the story:

Romaine Lowdermilk: The Dude Wrangler
As a long time fan of Arizona music, it's songs, singers and musicians, I'm always looking for ways to expose this wonderful music to new ears that will appreciate it for the great music that it is.  I own many recordings and tapes of Arizona singers and bands and have managed over the years to get these songs, and stories released on vinyl and records.  Romaine Lowdermilk was a most interesting character to me as I had heard about his rare acetates floating around the country (I don't even have a copy), however Floyd Ramsey's son Tim had the original Romaine tapes that were used to make these one of a kind acetates.  He was kind enough to donate them to my Arizona Music Archive, that includes all of the Audio Recorders of Arizona tape masters.

Daily Whip Out: "Lowdermilk, The Dude Wrangler, No. 2"
(ironically, this looks more like Marshall Trimble, The Ashfork Wrangler!)

Most singers, another local cowboy singer George Gillespie comes to mind, would make vinyl records of their singing to sell locally to friends and fans.  Romaine on the other hand made his own recordings of classic cowboy songs that he had honed while working on dude ranches and singing for winter visitors to The Valley.  There were two sessions, 1951 and again in 1955, done at Ramsey's Recording Studio on the corner of 7th Street and Weldon in Phoenix.  If anyone asked if he had any records he would tell them to stop by Ramsey's and there they would cut a 10" or 12" acetate on a recording lathe, in real time, type the song titles on a label, and the disc inserted into a blank record cover.  The 10" disc had 6 songs and the 12" had 12 songs.  I don't know if Romaine got any money directly for his albums, but Ramsey's charged $3.75 for a two sided disc.

Romiane Lowdermilk had a large following here as  a solo artist and as a member of The Arizona Wranglers in the early 30's.  The Wranglers had a radio show on KOY and they sang at The Arizona Biltmore before moving on to fame and fortune in L.A.,without Romaine, who (happily) remained in Phoenix. 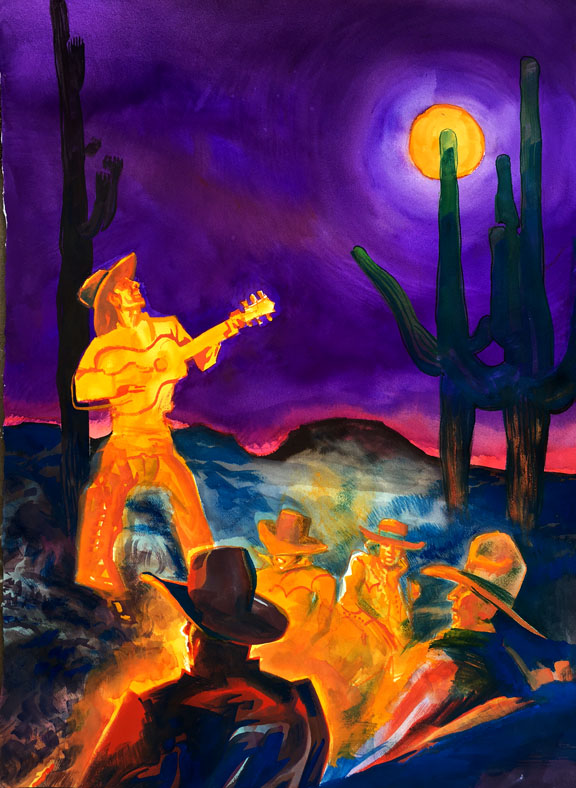 Daily Whip Out: "Lowdermilk (unfinished)"
(I like it that we have female campfire listeners, but I killed the campfire glow with too much orange)

Most of these cowboy singers are never heard beyond the cow punchers sitting around the campfire or the cattle that are in ear shot.  Some of them made it out of the saddle and onto a stage or the radio waves across America and a select few sang on the big screen.   Who knows what would have happened if Lowdermilk had traveled to the West Coast in 1931 with The Arizona Wranglers.  After all these years I am thrilled to help bring Romaine's music and his story to the readers of True West.

No one is better qualified to tell it than my friend Marshall Trimble, who has written a feature story about this talented singer that will run in the December issue.  Enjoy the memories and tales of the working cowboy in these 18 songs, performed by this one of a kind entertainer, Romaine Lowdermilk.
—Johnny D

As soon as the CDs are pressed, we will begin offering a free CD to anyone who subscribes to True West for a year ($29.95). it's going to make for a great Christmas present to our readers and to your friends who appreciate authentic cowboy music. And it's all because of the generosity of Johnny D.