Marty Robbins Has A Big Iron On His Hip 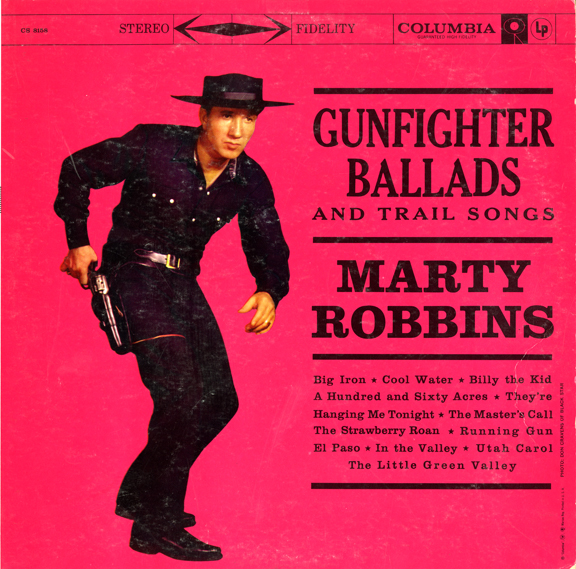 
My good friend and the unofficial music historian for Arizona—Johnny D—has been regaling me with stories about this legendary country singer for years. Our very own Marshall Trimble (who is the official Arizona state historian) is going to write up the feature for an upcoming issue of True West magazine. The basic story is this: Martin David Robinson was born on September 26, 1925, in Glendale, Arizona. One of nine children, his father was an amateur harmonica player and his grandfather, "Texas" Bob Heckle, was a traveling salesman and first-rate storyteller. "He had two little books of poetry he would sell," Marty later recalled. "I used to sing him church songs and he would tell me stories. A lot of the songs I've written were brought about because of stories he told me. Like 'Big Iron' I wrote that because he was a Texas Ranger. At least he told me he was."
His parents divorced when he was 12 years old, so he and his eight siblings moved with their mother to Phoenix. After dropping out of high school, Robbins and one of his brothers spent some time herding goats and breaking wild horses in the Bradshaw Mountains north of Phoenix.
During WWII, he joined the service and it was in the Navy that Robbins made his first sustained efforts at songwriting, teaching himself to play the guitar during his free time. When he returned to home to Phoenix in 1946, he had set his heart on a career in show business.
By the close of the 1940s, Robbins had his own radio program called Chuck Wagon Time as well as his own local TV show, Western Caravan. He landed a deal with Columbia Records in 1951, after a talent scout watched Robbins working in the studio on Western Caravan. The following year, Robbins released his first single, "Love Me or Leave Me Alone." This effort was not especially successful, but he soon scored the first of his many Top 10 singles with his 1953 song "I'll Go on Alone." He landed another hit months later with "I Couldn't Keep from Crying."
It was in 1959 when Robbins released his classic album Gunfighter Ballads and Trail Songs. The record featured two of his most popular and enduring songs: "El Paso" and "Big Iron." "El Paso" won the Grammy Award for best country and western recording. With a big, resonant voice and a flair for storytelling in the mode of his grandfather, Robbins continued to churn out chart-topping songs through the 1960s. His most famous tracks of the era include "Devil Woman," "Beggin' to You," "The Cowboy in the Continental Suit," "Ruby Ann" and "Ribbon of Darkness." In October 1982, Robbins was inducted into the Country Music Hall of Fame. Although he had fallen very ill, Robbins managed to release one last single that year, fittingly titled "Some Memories Won't Die," before he passed away. He suffered his third serious heart attack in early December. Despite undergoing surgery, Robbins died a few days later, on December 8, 1982, in a Nashville hospital. He was 57 years old.
He recorded more than 500 songs and 60 albums, and won two Grammy Awards. Each year for 19 consecutive years, Robbins managed to place at least one song on the Billboard country singles charts. "I've done what I wanted to do," he said in an interview near the end of his life. "I'm not a real good musician, but I can write pretty well." Well, thank you, Grandpa "Texas" Bob.
The small town of Agua Fria  (Cold Water) is just west of Marty's hometown of Glendale, Arizona.
"To the town of Agua Fria rode a stranger one fine day. Hardly spoke to folks around him didn't have too much to say. No one dared to ask his business no one dared to make a slip. For the stranger there among them had a big iron on his hip."
—Marty Robbins, the opening lyrics to "Big Iron"