Help Us Choose A Cover

September 22, 2016
We've got a December issue shaping up that is going to be chocked full of some solid history features. In fact, we have so many cover-worthy subjects, we are trying to figure out which cover story should get the big front-page-treatment. Take a look at these four proposed covers and tell us which one would get your attention on the newsstand. 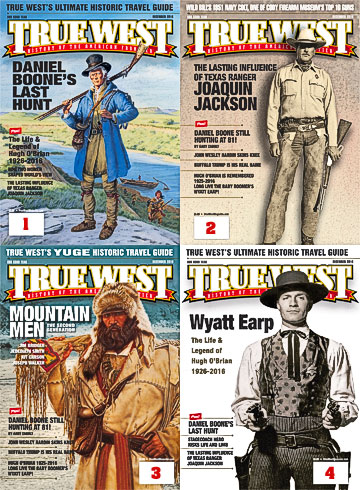 #2: Mark Boardman's insightful piece on the lasting influence of Texas Ranger Joaquin Jackson with a sidebar on how he influenced Jeff Bridges in the new hit movie, "Hell Or High Water."

#4: An homage to the life And Legend of Hugh O'Brian featuring his long and worthy career and his indelible impact on 64 million Baby Boomers.

"One cool image can make or break a magazine."
—BBB