January 24, 2017
Ran a True West Moment last Saturday in the Arizona Republic on what the pony express riders actually wore, as opposed to our popular image of them. I used an eye witness who famously encountered them on the trail. 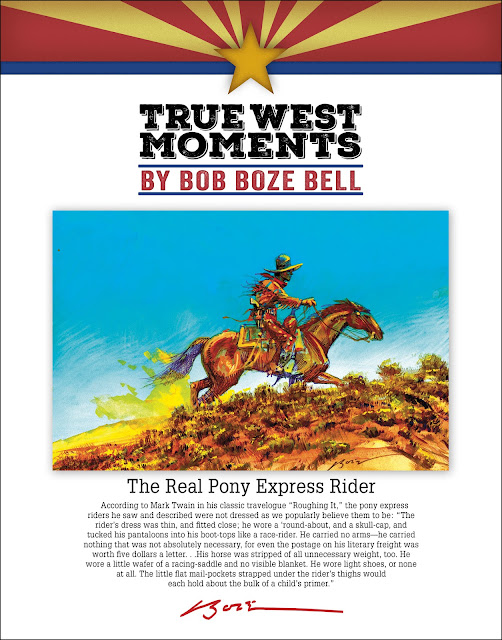 Got a snippy email response:

"Your piece in today's paper on The Real Pony Express Rider states that [the pony express rider] 'tucked his pantaloons into his boot-tops like a race rider.' Four scant sentences later we read, 'He wore light shoes, or none at all.' Contradictory? Yes, obviously. More importantly the reader thinks 'this guy doesn't know what he's talking about.'"
—Frank Stephenson

Okay, is he referring to me not knowing what I'm talking about, or Mark Twain? Also, the space was tight and I combined two descriptions by Mark Twain of the pony express riders, plural, he witnessed on the trail. So I sent a light-hearted response to Frank:

Hey, Frank, first of all Mark Twain actually saw real pony express riders, plural, and he was describing what they wore, that doesn't make it contradictory, he's an eyewitness.
—BBB

But Frank was having none of it:

"The article I read is contradictory. Mark Twain or not."
—Frank Stephenson

I wanted to argue this point some more, and started to hit "reply,"  but then I remembered a quote by a dude named Stanisaw:

"The only fool bigger than the fool who knows it all is the person who argues with him."
—Stanisaw J. Lec